Gold prices pushed higher as the US Dollar swooned amid an upswell in market-wide risk appetite. Stocks advanced on Wall Street, with the bellwether S&P 500 index rising to a five-month high. That drove capital flows out of the haven reserve currency, boosting the appeal of anti-fiat alternatives like the yellow metal.

Crude oil prices briefly spiked down to a one-week low amid worries about the outlook for demand as signs of cooling uptake from China crossed the wires. That pressure dissipated as the risk-on tilt in broader markets overshadowed other considerations however, with the WTI contract tracking shares higher in the close.

While no discrete catalyst for these moves is readily apparent, a closer look at stock market performance offers a sense of what might have happened. The Dow Jones Industrial Average tellingly finished the day flat even as the tech-heavy Nasdaq added a whopping 2.51 percent.

A look at sectoral performance within the catch-all S&P 500 paints a similar picture. Technology and consumer discretionary names outperformed while cyclical areas like materials, financials and industrials suffered. In other words, relative resilience amid lasting Covid-19 disruption was again rewarded.

This has become a familiar pattern amid the reach for yield that brought capital back to equities in the second quarter as the Fed managed to contain a would-be cash crunch. It seems to imply that markets don’t see a swift end to the pandemic’s chilling effect on economic activity.

The longer-term implications of that view may start to sour sentiment however a raft of corporate earnings reports begins to flood the wires. Second-quarter outcomes may be predictably abysmal but it is downbeat guidance for the second half of 2020 and beyond that may spook investors.

Safety-seeking capital flows look likely to pour into the Greenback once againin this scenario, pushing gold downward as anti-fiat hedges fall out favor. Crude oil is likewise vulnerable as the spectrum of cyclical assets wobbles amid a reconsideration of valuations in the face of longer-lasting malaise.

Reports from Coca-Cola, Lockheed Martin and United Airlines headline the docket today. API crude oil inventory data is also due, and will be weighed against expectations of a nominal 260k-barrel build expected to be reported in official EIA statistics on Wednesday.

Gold prices probed a nine-year high route to challenge resistance at 1827.82, the 50%Fibonacci expansion. The metal narrowly fell short of closing above the monthly high however, which might have confirmed bullish conviction. Meanwhile, the emergence of negative RSI divergence now warns of ebbing upside momentum and may precede topping. A close below the 38.2%Fib at 1789.78 looks like the pre-requisite for a reversal with follow-through. Alternatively, breaching resistance eyes the 61.8% level at 1864.86 next. 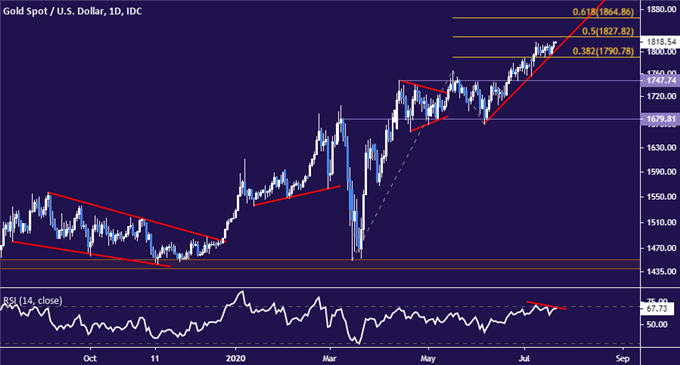 Crude oil prices continue to idle between rising trend line support capping the downside since late May and inflection zone resistance in the 42.40-43.88 area. A breakdown confirmed on a daily closing basis appears to target 34.78 as the next downside barrier. Alternatively, establishing a foothold above resistance probably opens the door to challenge the $50/bbl figure. 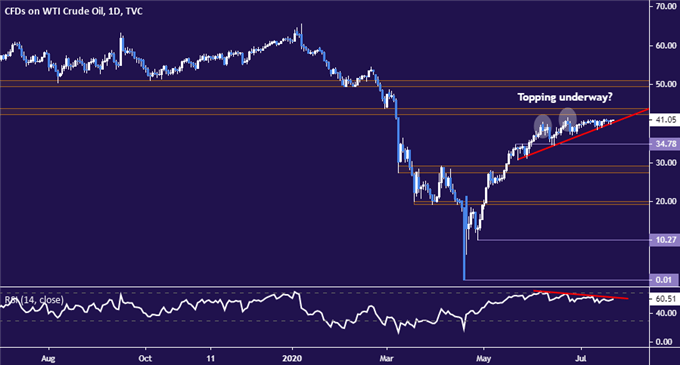