Gold prices retreated after probing eight-year highs just below the $1800/oz figure. The drop came despite a weaker US Dollar – which frequently helps drive anti-fiat demand for the yellow metal – and seemed disconnected from price action in the pace-setting Treasury market.

Absent a readily identifiable catalyst from these standby catalysts, one possible explanation is that the downturn reflected pre-positioning before minutes from June’s FOMC meeting crossed the wires. The central bank signaled resistance to adding so-called ‘yield curve control’ to its stimulus mix at that sit-down.

The Minutes echoed that sentiment, with most policymakers instead preferring to strengthen ‘forward guidance’ as a lever of monetary accommodation. That gold idled as soundbites from the document crossed the wires might imply that markets saw the outcome as in line with what has been priced in already.

Crude oil prices were little-changed, edging a hair lower but ultimately resting within a now-familiar choppy range near the $40/bbl figure. That is despite EIA inventory flow data showing US stockpiles unexpectedly shed nearly 7.2 million barrels to mark the largest weekly drop this year.

Looking ahead, June’s US labor market data is in focus. Analysts project a 3.06 million rise in nonfarm payrolls and a jobless rate of 12.5 percent, down from 13.3 percent in the prior month. While such outcomes certainly mark incremental improvement, they nevertheless point to an abysmal employment situation.

So, while adding over 3 million to payrolls would amount to the single best month of job creation since the Second World War, the total number of employed Americans would still amount to less than 140 million. That’s compared with a high of 152.4 million in February.

The markets may well interpret such results to mean that the incremental improvement will be enough to keep Fed policymakers on the sidelines even as the economy continues to suffer, souring sentiment. Commodities may turn lower as haven demand buoys the US Dollar in this scenario.

Gold prices are testing resistance marked by the 38.2% Fibonacci expansion at 1789.78, with a break above this barrier seemingly putting the 50% level at 1827.82 into focus next. Alternatively, reverting back below range top support-turned-resistance at 1747.74 probably puts the inflection point at 1679.81 back in pay. 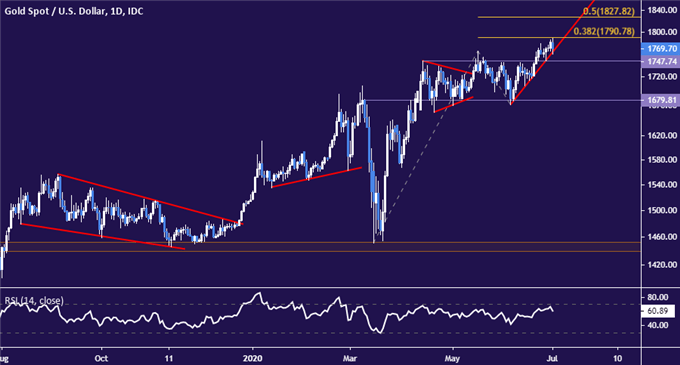 Crude oil prices continue to drift below resistance in the 42.40-43.88 area. Negative RSI divergence points to fizzling upside momentum, which may reflect digestion after a spirited advance but could also presage topping. A daily close below support at 34.78 is likely to expose the 27.40-29.11 area. Alternatively, establishing a foothold above 43.88 probably sets up a test of the $50/bbl figure next. 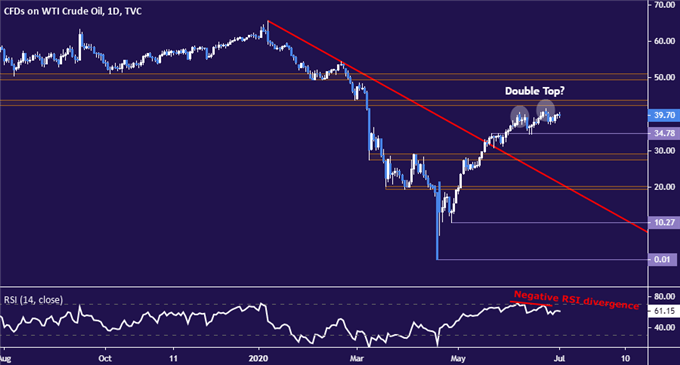