Crude oil prices ticked up, echoing a broader recovery in risk appetite. The WTI contract edged cautiously higher alongside stocks and other cyclical assets for much of the day but the move hit a wall once soundbites from US Senate testimony by Fed Chair Jerome Powell hit the wires (as expected).

Mr Powell argued against deploying negative interest rates as the next step in expanding stimulus to the ailing economy. He also suggested that ‘yield curve control’ – another avenue for easing that would pin a specific bond rate to a target level – is in the early stages of consideration rather than a near-term option.

That spooked markets yearning for additional accommodation amid the worst recession since the Great Depression. The risk-on move stalled, pushing oil down from its intraday high. Gold prices stalled as the defensive backdrop lifted the US Dollar while pressuring bond yields, making for conflicting cues.

This narrative is likely to carry through into the day ahead. Having appeared in the Senate, Mr Powell will is now due for a repeat performance in the House. His speech will likely remain all-but the same, but a different flavor to the follow-on Q&A session may produce a fresh lead for the markets.

On the data front, weekly EIA inventory flow data is due to cross the wires, with forecasts calling for a 1.6-million-barrel build. A private-sector estimate from API flagged a heftier 3.9-million-barrel rise yesterday. If this proves telling, a degree of downward pull may emerge.

OPEC will also publish its monthly assessment of the energy market, complete with supply and demand projections. Markets may be keen to reconcile that with cartel-led efforts to limit output and thereby boost prices, a scheme struggling for lasting influence as the global downturn undermines uptake.

Crude oil prices are trading sideways above near-term support at 34.78 after the formation of a bearish Dark Cloud Cover candlestick pattern – a hit at topping – led into a pullback. Breaking lower, with confirmation on a daily closing basis, seems to expose the 27.40-29.11 area. Resistance is in the 42.40-43.88 zone. 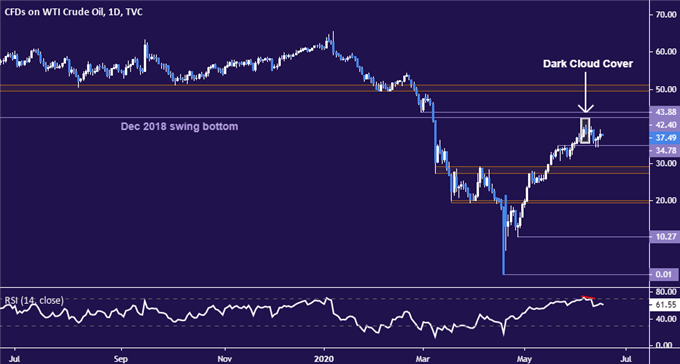 Gold prices continue to mark time within a choppy range in play since mid-April. Support is in the 1679.81-93.92 region, with a daily close below that probably clearing the way to challenge the 38.2% Fibonacci retracement at 1645.40. The May 18 highat 1765.30 establishes the upper layer of resistance. 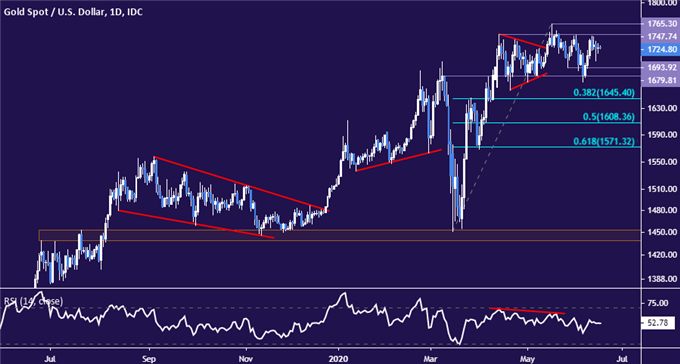