Crude oil prices sank alongside stocks as the markets digested the FOMC monetary policy announcement. The central bank disappointed investors’ hopes for the near-term implementation of ‘yield curve control’ (YCC), a policy that would have pinned bond yields at a particular maturity to a target level.

Markets have speculated that the US central bank may follow in the footsteps of the BOJ and the RBA in adopting this approach, with implantation favoring Australia’s model of targeting the shorter end of the curve. It then seems telling that 2-year rates rose while 10-year ones fell as liquidation got underway.

Traders’ displeasure with the FOMC’s noncommittal YCC posture seems understandable. Pinning the rate on near-term debt at some low level would likely make dividend yield appear that much more attractive (absent utter market meltdown), stoking a risk-on rally. As it happened, the Fed drove in the opposite direction.

Gold prices edged slightly lower amid the liquidation. Mixed cues from bond yields – that is, divergence along the curve – and a stronger US Dollar probably accounted for this response. The currency rediscovered its appeal as a liquidity haven, with gains undermining the appeal of anti-fiat alternatives.

Looking ahead, a spirited upswing in S&P 500 index futures suggests some room for sentiment to recover into the week-end. That might encourage recovery across the spectrum of assets that suffered amid yesterday’s bloodletting, including oil and gold.

The University of Michigan gauge of US consumer confidence headlines the economic data docket. It is expected to show improvement for a second consecutive month, though the gauge’s overall setting is but a hair higher than the 8-year low set in April.

Crude oil prices edged lower after producing a bearish Dark Cloud Cover candlestick pattern, with sellers now menacing support at 34.78. A daily close below that exposes the 27.40-29.11 inflection zone. Near-term resistance is in the 42.40-43.88 area. Breaking above that likely puts the $50/bbl figure in the crosshairs. 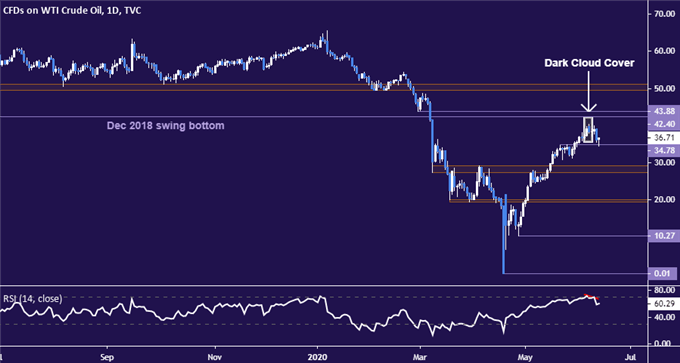 Gold prices continue to idle near the middle of a choppy range containing them since mid-April. Resistance is marked by the May 18 highat 1765.30. Support is in the 1679.81-93.92 area, with a break below that on a daily closing basis probably exposing the 38.2% Fibonacci retracement at 1645.40 next. 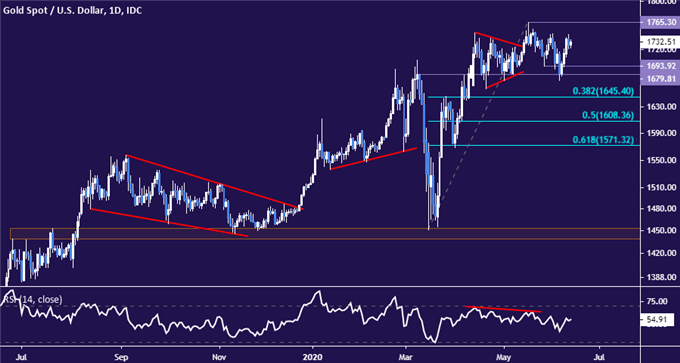