Crude oil prices marked time Tuesday, digesting the prior day’s eye-catching selloff. API data saying that US inventories added 8.42 million barrels last week did not have lasting impact despite the projection’s stark contrast with expectations calling for a 10.1-million-barrel drawdown to be reported in official EIA figures due today. That may change if the foreshadowing proves close to accurate, stoking selling pressure.

However, such considerations may dissolve into broader price moves inspired by the much-anticipated Fed monetary policy announcement. No changes in the central bank’s stance are expected, so any market-moving potential is likely to come from the forward guidance on offer in the statement from the rate-setting FOMC committee, updated forecasts and a press conference with Fed Chair Jerome Powell.

Scope for additional stimulus and the timeline for its implementation are almost certainly what investors are looking to gauge. In particular, the markets will want a sense of whether the Fed is prepared to institute a version of “yield curve control” (YCC). This is a policy now implemented by the BOJ and the RBA to pin the pace of QE purchases to maintaining a particular bond yield target.

Markets may cheer if the introduction of such an auto-correcting mechanism – which would automatically expand stimulus if conditions deteriorate anew – seems to be forthcoming relatively soon. Crude oil is likely to rise with stocks and other cyclically-minded assets in this scenario. Gold may break higher too, clearing the bounds of the choppy range in play since mid-April.

Sentiment is likely to sour if the US central bank opts for a more sanguine, wait-and-see approach. That probably bodes ill for crude oil as disappointed traders dial back exposure to risky assets. Gold is also vulnerable in this scenario as the appeal of non-interest-bearing and anti-fiat alternatives is diminished. The US Dollar seems likely to rise in this scenario, compounding the yellow metal’s troubles.

Crude oil prices put in a bearish Dark Cloud Cover candlestick pattern below resistance in the 42.40-43.88 area hinting that a top may be taking shape. Negative RSI divergence bolsters the case for weakness. Clearing initial support at below 34.78 likely exposes 27.40-29.11 inflection zone next. Alternatively, a push above resistance appears to set the stage for a test of the $50/bbl figure. 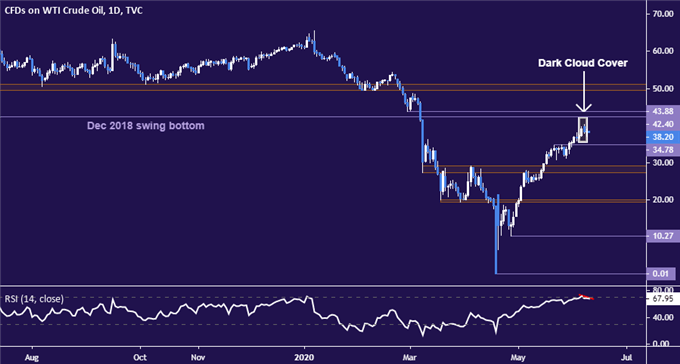 Gold prices rebounded toward the middle of a choppy range containing price action since mid-April. Pivotal resistance remains at 1765.30, the May 18 high. A daily close above that is probably needed to make the case for upside follow-through. Alternatively, a breach of support in the 1679.81-93.92 area appears to aim for the 38.2% Fibonacci retracement at 1645.40 thereafter. 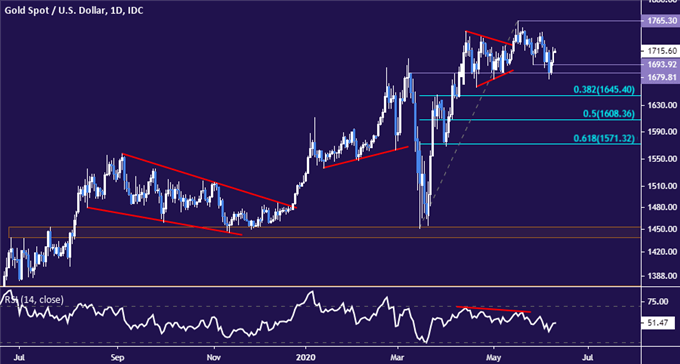