Crude oil prices edged higher at the weekly trading open, echoing a broadly optimistic tone in Asia-Pacific trade. Regional bourses added more than 2 percent on average in a move that seemed to be animated by US President Donald Trump, who shied away from announcing harsh steps to punish China for a new security law that Washington says compromises Hong Kong’s autonomy.

Speaking at a closely-watched press conference on Friday, Trump said that he will not abandon the Phase-1 US-China trade deal struck late last year. Instead, he threatened to ‘begin the process’ of revoking Hong Kong’s preferential economic treatment and sanction individual officials. The President added that a working group will study US-listed Chinese companies, with as-yet unclear intent.

Subsequent price action suggests that markets feared much worse, particularly since Mr Trump has previously said that additional tariffs are the best counter-measure for what he sees as China’s many misdeeds (in that particular instance he was apparently talking about Beijing’s handling of the Covid-19 outbreak). Bellwether S&P 500 index futures are pointing higher to suggest the risk-on mood.

Interestingly, gold prices are on the upswing against this backdrop. In fact, the metal has been rising since the middle of last week, seemingly oblivious to the broader macro narrative. That may reflect swelling unrest in the US. The metal’s rise – and a parallel US Dollar selloff – may reflect bets on Fed stimulus to offset the economic hit from increasingly disruptive and violent nationwide protests following the killing of George Floyd by a police officer in Minneapolis, Minnesota.

Crude oil prices edged past range resistance at 34.78, seemingly opening the door for a retest of former support in the 42.40-43.88 area. A daily close above that looks likely to set the stage for a challenge of the $50/bbl figure. However, negative RSI divergence warns of ebbing upside momentum and hints that a reversal lower may be in the cards. Slipping back below 34.78 – now recast as support – appears to initially target the 27.40-29.11 inflection zone. 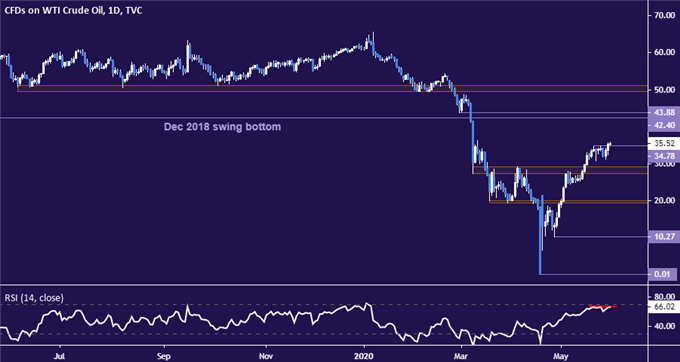 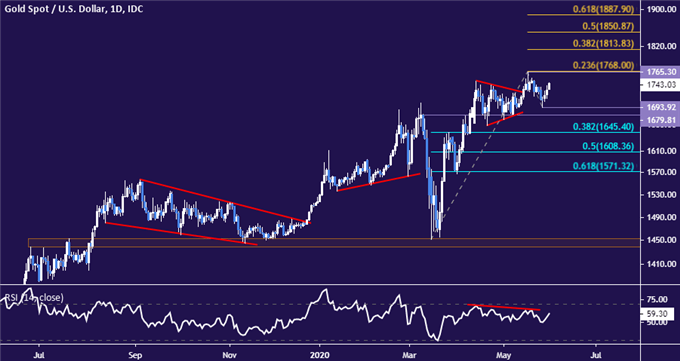