Gold prices failed to hold onto the gains with which they started the session.

The backdrop looks obviously supportive with the prospect of near-term economic weakness across the globe leading to massive stimulus and the sort of monetary largesse which tends to support gold prices.

There were signs that risk aversion had picked up too. US President Donald Trump pointed the finger at his Chinese counterpart Xi Jinping, accusing him via Twitter of direct responsibility for anti-US propaganda. US stock futures slipped a little after this, but the knock-on effect to gold was limited and Asia Pacific equity had a mixed, narrow session.

The remainder of the day offers plenty of interesting economic data points. Purchasing Managers Indexes from Europe and the US will give investors an early snapshot of May activity. Sadly the pictures are unlikely to be reassuring with most expected to be well short of the key 50-point level which separates expansion from contraction.

Oil prices were higher again, with the market responding to another fall in US stockpile levels. Crude oil stocks fell by five million barrels last week, according to the Energy Information Administration, when the market had expected a one million barrel rise.

However, storage facilities remain very well used and, although there are clear signs that production cuts are restraining supply, levels of demand remain under deep question thanks to the various economic shutdowns either still in force or being unwound only gradually. 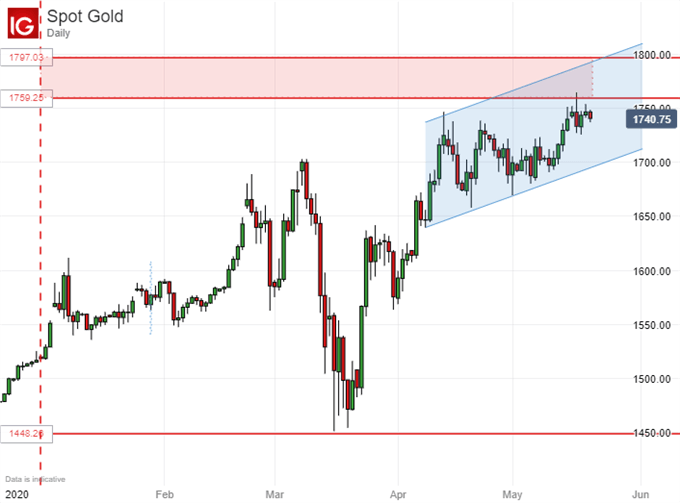 Gold prices remain well within their daily-chart uptrend and have just made a new higher high within it. However, a range of resistance from late 2012 still stands between gold’s bulls and the market’s all time highs from earlier that year.

So far the market has only managed a single, quick intraday foray into that range with very little follow through. If prices have not pushed into that range by month end then some correction lower may well be seen, possibly even testing psychological support at $1700/ounce.

However there seems little fundamental reason why gold prices should reverse now and an eventual move into that resistance zone and, quite possibly, above it, looks more likely. 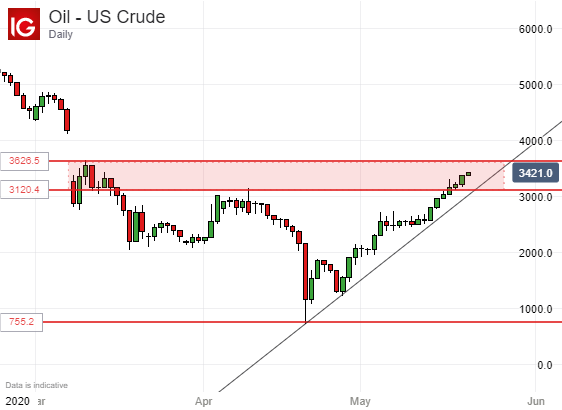 US crude oil prices remain above the steep uptrend line in place since late April and have edged into their own resistance zone formed by trading levels seen on the way down between March 8 and 16. Above this the key $40/barrel level will beckon. That hasn’t been seen for more than two months. However, given the clear question marks hanging over Covid-hit fundamental demand, it may be likely that the market will have to see a period on consolidation before seriously challenging $40.