Gold prices were higher in Tuesday’s Asia Pacific trading session as ongoing signs of tension between China and the US kept the bid for counter-cyclical assets healthy even as hopes for a coronavirus vaccine lifted broad risk appetite.

The metal was hit on Monday when drug-maker Moderna said that its experimental inoculation had showed early-trial promise and that story continued to weigh. However, US lawmakers are working on proposals to move important manufacturing operations out of China with the Nasdaq stock market reportedly set to unveil new restrictions which will make listing tougher for some Chinese companies.

Gold is also supported by the expectation that national economic data from around the world will remain grim as countries tip-toe out of Covid lockdown, with attendant low interest rates also boosting gold’s appeal. The prospect of sub-zero rates in the UK is now being actively considered by investors.

Crude oil prices rose initially on Tuesday, buoyed up by hope that demand will now start to rise more sustainably even as supply cuts start to deplete the glut of oil now sitting in storage.

Aside from reductions now in force from the Organization of Petroleum Exporting Countries and allies including Russia, the US Energy Information Administration expects output from the seven major onshore shale formations to fall by a record 197,000 barrels per day in June. 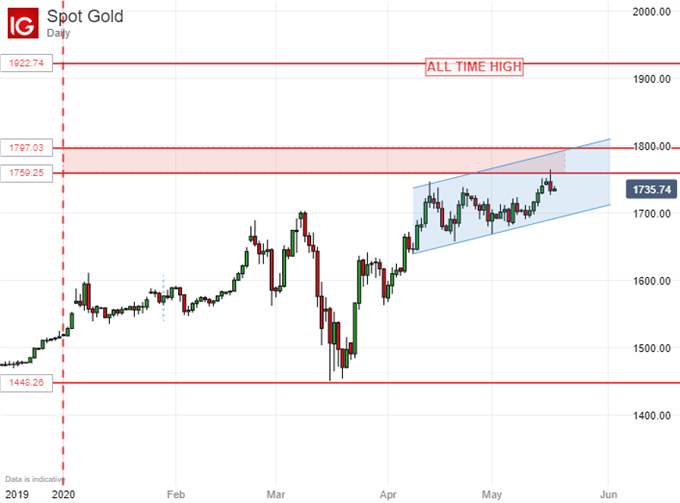 Gold prices remain in the ascendant with their latest uptrend holding. However, they have yet to break back conclusively into a zone of resistance from 2012 which bars the way back to all time highs. With the daily chart showing signs of topping out before this task has been accomplished, it might be best to wait and see if the bulls have given up hope of getting back into that zone. The weekly close relative to it could be an important clue. If the market remains below the prospective range base at $1759.25/ounce then a test of the channel bottom could be on the cards. 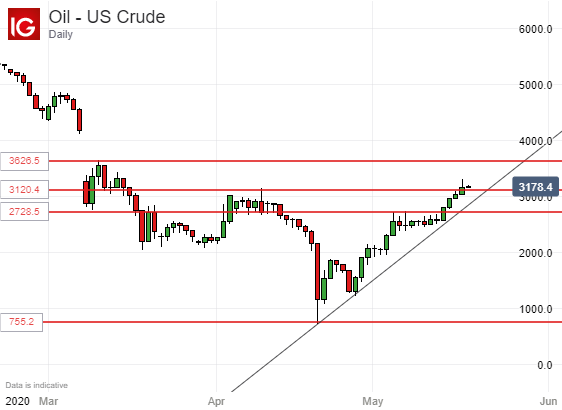 US crude oil prices remain clearly in thrall to the steep uptrend from April’s lows. Their rise has now taken them above previous resistance derived from April 3-13’s trade in the $29.33 area. The market is starting to look overbought and it would be no surprise to see a period of consolidation take it back to those levels. However, for now the bulls are in control and the last notable peak is in their sights. That was March 10’s intraday high of $36.27.