Gold prices were a little higher in Tuesday’s Asia-Pacific trade with worries about ‘second wave’ coronavirus infections in countries which attempt to ease restrictions underlining the bid for haven assets.

However, the US Dollar was the most prominent of those assets and its own rise to two-week highs appeared to cap gold’s rise, as it often can given that gold products are generally dollar-denominated.

Confirmation that inflationary pressures are contained came from China, where consumer price inflation missed forecasts and factory gate prices rose at their slowest rate since April 2016. This may have weighed a little on gold, as asset which is often seen as an inflation hedge.

Crude oil prices were lower as the session got under way but they picked up as it went on, probably on news that Saudi Arabia has pledged to cut production buy a further million barrels per day. Together with reductions already in place that reportedly means that this key ‘swing producer’ will have reduced its daily output by 40% since last month.

Other producers such as Kuwait and the United Arab Emirates have also said they will further cut supply, which may reassure a market still worried that storage capacity is close to full as the market attempts to deal with the glut produced earlier in the year. 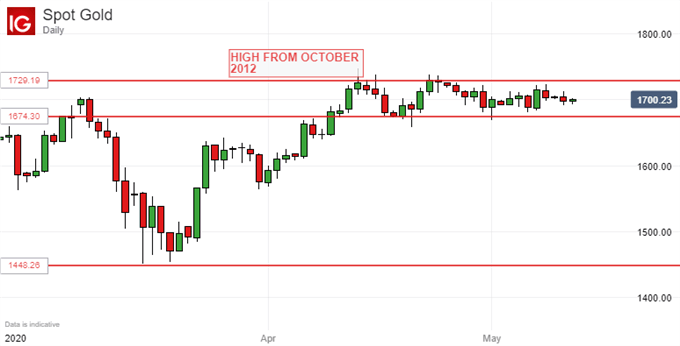 Gold prices remain confined to the broad trading range which has contained them on a daily closing basis since April 9. It’s notable that there’s been relatively little impulse to take obvious profit at these levels, even though they’re quite elevated and, while the coronavirus story remain in overall charge, it seems extremely unlikely that that will change,

By the same token, however, there’s clearly little appetite to test the range’s upper boundary at $1729.19. This hasn’t faced a serious attempt since April 23.

The market has made a modest series of lower highs since May 7, which may argue that a retry of the lower bound may be more likely in the near-term, but there’s little to suggest a durable break is imminent. 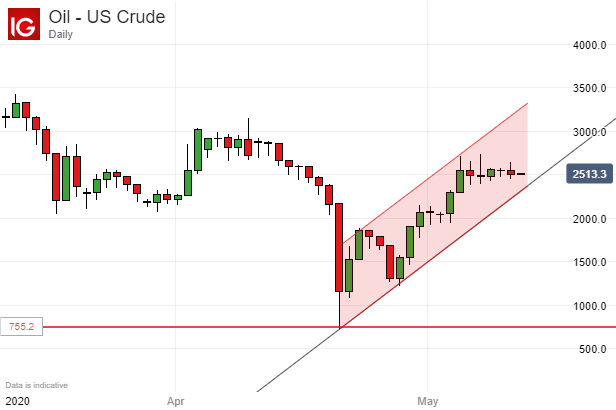 That range trade now sees the uptrend itself in some jeopardy, with trendline support close to the current market in the $23.59/barrel area. The fundamental prospect of more production cuts may offer this market more support in the coming US and European sessions. However, should it fail to do so, a test of that support is likely very soon.