Crude oil prices slipped initially in Monday’s Asia Pacific session, but then pared much of that loss, with the market clearly in the grip of powerful, differentiated factors.

Of course, the coronavirus can never be far away from the top of the list. Sure enough, worries about second-wave infections reportedly hit the market early.

Chinese authorities reported on Sunday what could be the start of a new wave of cases in the northeast of the country, with South Korea also concerned. Infections were also accelerating in Germany after the rolling back of behavioural restrictions.

Fears that oil storage capacity will be overwhelmed despite the heavy production cuts which kicked in this month also continued to weigh.

However, hopes engendered Sunday by the People’s Back of China helped support broad risk appetite, including that for energy. The PBOC left all its options on the table and omitted its customary warning of the dangers inherent in ‘flood-like stimulus.’ This has in turn raised hopes that the considerable remedial action already taken will be added to.

The prospect of more gradual economic re-opening around the world saw most regional equity mainboards sharply higher and also gave other growth-correlated assets a boost.

Meanwhile gold prices were steady but perhaps unsurprisingly they remained above the psychological $1700/ounce level as the underlying bid for this asset remains very healthy.

Monday won’t offer financial markets a huge amount in the way of economic data cues, but things will liven up markedly as the week goes on with a range of released from New Zealand’s monetary policy decision through to UK growth levels all on tap. 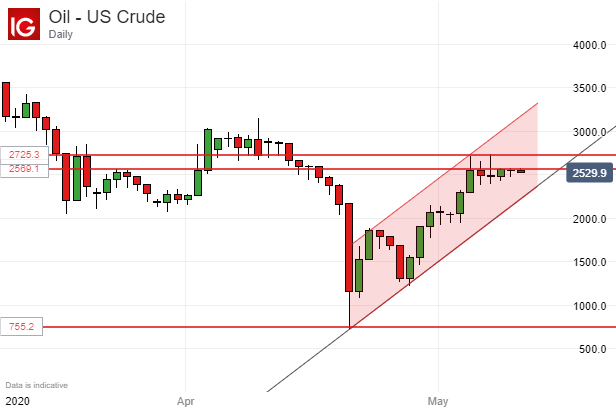 The uptrend from late April’s lows remains very much in place, but the market is also starting to look a little exhausted. The lower boundary of the overall uptrend channel is coming rather close to the market, and now provides support in the $22.47/barrel area.

Bullish progress appears to have been stymied by the $25.29 resistance point which has held as resistance on a daily closing basis. If it can’t be broken above and held then a test of channel support will be extremely likely. That said it will probably take some shock bad news out of left field to push the market durably below psychological support at $20, at least in the near term. 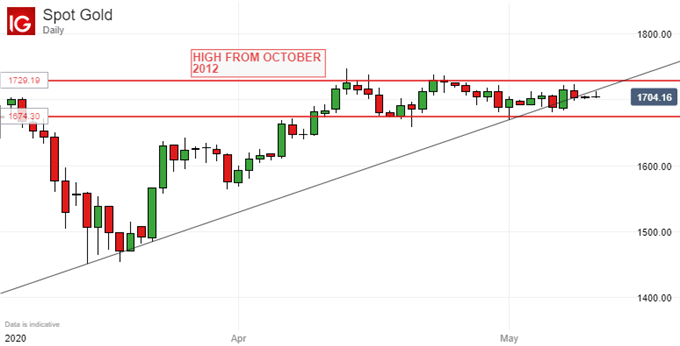 Gold prices remain confined to a broad, elevated trading band which has contained all market action on a daily closing basis since April 9.

When it comes, a durable break of this either way is likely to be instructive but there’s no sign yet of any such thing. Prices have broken below their previous uptrend in the last four days, but this has been more a function of their rangebound trading than any profound impetus to go lower.

Keeping a close eye on the range is probably still the best way to look at this market day to day.