Crude oil prices were lower in Asia Wednesday as news of rising US inventories in the previous session reignited oversupply concerns.

These had calmed in recent sessions as production cuts agreed last month kick in and investors began to look with hope toward the tentative reopening of national economies shuttered by coronavirus. However, the American Petroleum Institute said that crude oil stockpiles rose last week by 8.4 million barrels, more than expected. Official data from the Energy Information Agency are due later Wednesday.

Still, US crude oil prices remain above $25/barrel, having risen from lows around $15 at the start of this month.

Japanese markets remained closed for holiday, but Chinese mainboards rose, as did South Korea’s partly on gains for Hyundai which has said it plans to re-start production at certain plants.

Markets in general are looking toward the end of the week and official US employment numbers. These are expected to be horrendous, with massive, multi-million job losses expected. Haven assets such as gold are likely to preserve their bid as the numbers loom. 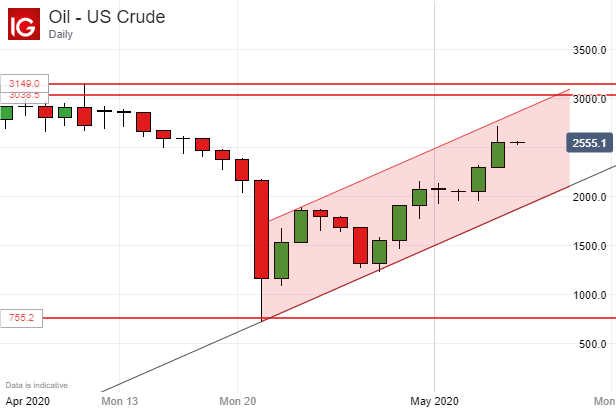 Prices’ overall uptrend remains very much in place, barely threatened at all so far by Wednesday’s slip. Bulls will still target the psychological $30/barrel level last seen on April 9 and now coinciding well with the upper boundary of the current rising channel. That same channel now offers support at $19.75, although that is quite a long way below the market and a near-term test looks unlikely. 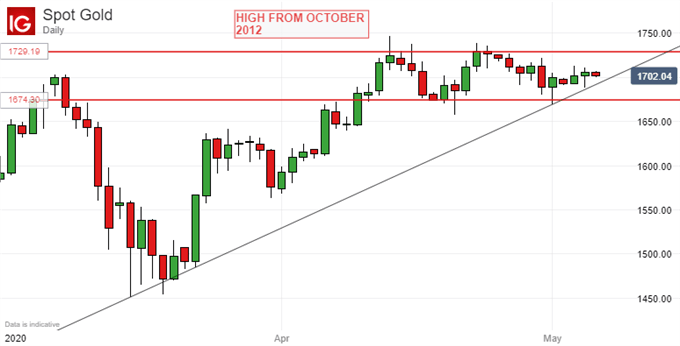 Gold remains essentially rangebound at an elevated level with little sign of impetus in the market to break out of the band between $1729.19 and $1674.30 which has held the market on a daily closing basis for more than a month.

There are signs that a little exhaustion is setting in, with the uptrend line from March 19 under some pressure on the daily chart. However a break below this would not be conclusive evidence of price weakness as along as the broader range holds.