Gold Prices Down As Many Countries Weigh Covid Lockdown Rollback

Gold prices were lower on Tuesday morning in Asia, with the prospect of some tentative emergence from coronavirus lockdowns boosting appetite for riskier assets.

Some US states are starting to open up their economies, with countries such as Italy and Finland also allowing more activity after many shuttered weeks.

Still, the underlying haven bid for gold is likely to remain in place given expectations that the virus’ effects have already been severe enough to ensure a global recession. The week’s main economic event will be Friday’s release of official US labor market statistics. These are expected to be the weakest since 1939, with millions more jobs lost.

The apparent ratcheting-up of trade tensions between China and the United States will also keep investors cautious.

Production cuts will kick in this month from the Organization of Petroleum Exporting Countries and allies including Russia, the so-called ‘OPEC Plus’ group, with major companies also taking steps to rein in their output.

Clearly demand will remain subdued until something like economic normality is restored, and the current huge supply glut has to work its way through to end users. However, some analysts have increased their price forecasts, with Goldman Sachs reportedly upping its 2021 US crude oil call to $55.63/barrel from $52.50. 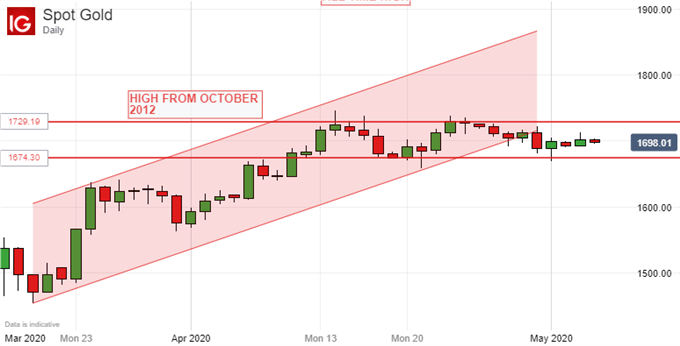 That underlying haven bid is clearly evident on the daily chart, with prices still confined to a narrow, elevated range even though they’ve broken below their previously dominant downtrend.

Support remains in place at the range’s lower bound $1674.30/ounce, with the psychological $1600 mark lurking below that. The market is clearly in no hurry to test these support levels, however, probably fearful that buyers would emerge soon enough if it did. By the same token however the ground above $1700 remains beyond the bulls. A durable range break will probably be instructive, but there seems little sign of one yet. 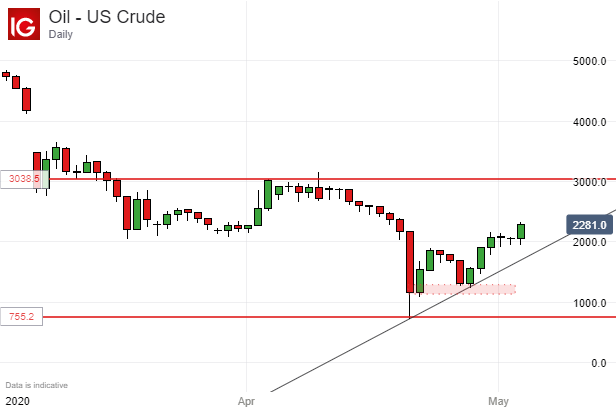 Crude oil prices have powered back above the $20/barrel mark and continue to respect the nascent uptrend in place since the lows of April. That now offers support at $17.52, a point now some way below the market given current daily ranges. The market has perhaps tellingly now clawed back all of the very sharp falls seen on April 21. It did so by topping $21.76 and the bulls may be tempted to try for resistance at $30 for as long as that point holds.