Crude oil prices recouped some early losses on Monday as a new Asia-Pacific trading week got under way, but the market remains pressured by worries of a supply glut and, perhaps, renewed trade tensions between China and the United States.

Last year saw markets roiled by trade war fears, only somewhat ameliorated by an interim agreement. However, now US President Donald Trump has suggested that China could face new sanctions as retaliation for the spread of coronavirus worldwide.

The energy market found support last week, and major price rises, as leading exporters such as Saudi Arabia and Russia were set to start cutting production this month. Supermajors Exxon Mobil and Chevron have also said they would make substantial reductions. These cuts come in response to the demand destruction caused by the contagion, but the market looks set to be well supplied for some time despite them, with storage facilities already filling up both onshore and at sea.

The prospect of renewed trade tensions appears to have offered the market a degree of support, as have warnings of potentially lasting damage to the US economy despite trillion-dollar stimulus programs.

Market focus this week will be on the remainder of the corporate earnings season, but also on official US labor market statistics which are due on Friday. The unemployment rate is expected to jump to multi-decade highs above 16% as a result of virus-inspired layoffs. 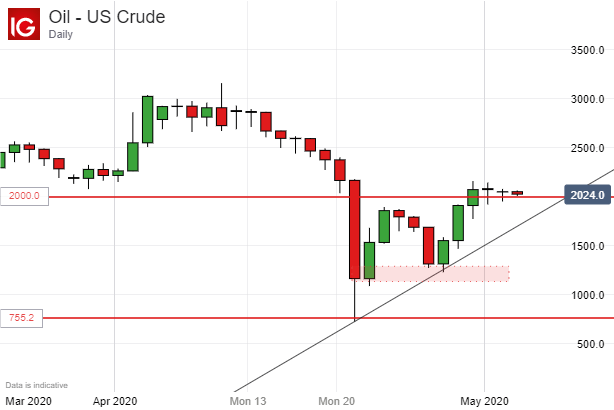 US crude oil’s nascent uptrend is holding on the daily chart, but there are some signs that it’s already fading out. The psychologically important $20/barrel level has been breached, but hardly convincingly so. Daily ranges have narrowed again but that could simply reflect widespread May Day public holidays and should not overly concern investors.

The uptrend line offers support at $16.88 but a slip back below $20 could well presage a deeper fall. Bulls will probably have to take out all of April 21’s sharp fall to convince the market that they’re still fighting. That will mean durably topping $21.63, a level which should probably be watched closely this week. 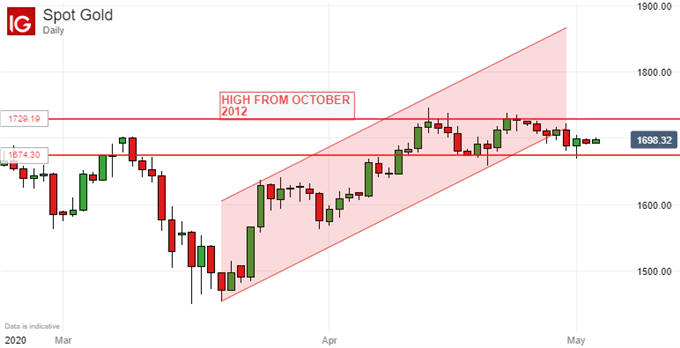 Gold prices remain elevated and resistant to profit taking despite ostensibly better risk appetite through April. They have clearly broken below their previously dominant uptrend channel but range trade has been the watchword since, rather than any serious retracement.

Support at $1674.30 has been lost on an intraday basis in the last three days, but remains solid in terms of the daily close. A break below that level might see March 24’s high of $11643 back in play as support, but, unless that break comes with some better fundamental news, it seems likely to find buyers.