Gold prices were lower in Asia on Thursday as risk sentiment soared, boosting riskier assets, on hopes that a coronavirus treatment could soon be available.

US pharmaceutical company Gilead Sciences said that preliminary trials with its anti-viral remdesivir have been encouraging and White House advisor Anthony Fauci said that the tests were ‘quite good news’ and that the drug would set new standards for patient care.

There was also cheer for markets in China’s official Purchasing Managers Index data for April. It showed strong expansion for the service sector and, even though the manufacturing print missed forecasts, its headline reading remained in the green.

Given all that it’s perhaps unsurprising that perceived haven assets such as gold should have had a poor session but they were underpinned by the US Federal Reserve. It left interest rates alone on Wednesday, as expected, but continues to provide broad support to the shuttered US economy and its credit markets.

Crude oil prices rose both on that generally higher risk appetite and, more specifically, on news that US stockpiles grew by less than expected in the most recent data.

The Energy Information Administration said on Wednesday that crude oil inventories were up by nine million barrels last week, well below the 10.6 million build expected. Gasoline stockpiles fell by nearly four million barrels, albeit from the record highs seen previously. 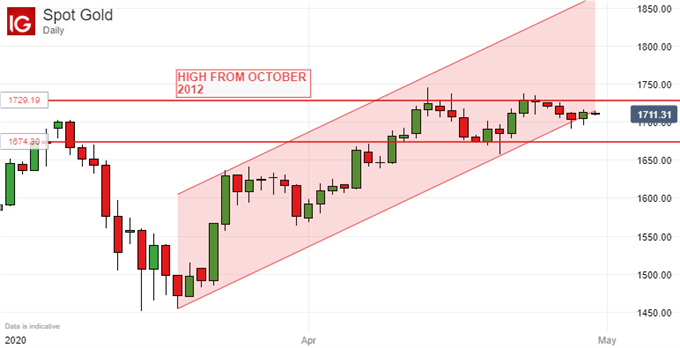 On their daily chart gold prices continue to flirt with the lower boundary of the uptrend channel dominant since mid-March.

That currently comes in very close to the current market at $1712.01/ounce. That said there’s clearly as yet no strong impulse to sell gold down significantly, despite the clear revival in appetite for other assets. Gold seems effectively stuck to the range trade which has been in place within the uptrend since April 9. It now provides support at $1674.30. A near-term fall below that doesn’t look likely but would probably present bulls with difficulties were it to occur. 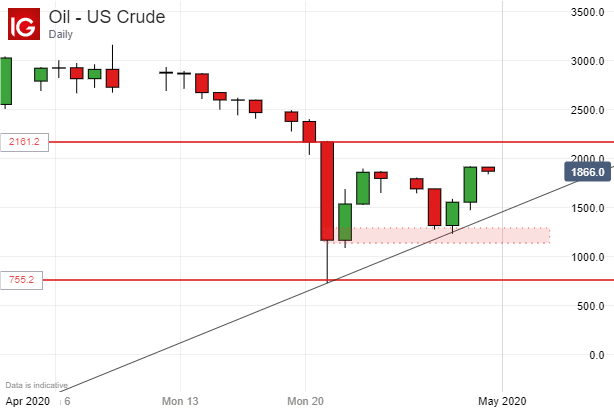 Crude oil prices continue to respect the nascent, building uptrend from the lows of April 20. They’ve left their previous tentative support zone behind, to provide a near-term prop at $12.79/barrel. Resistance comes in at $21.61. If the market can retake that it will have clawed back all of the massive daily fall seen on April 21, as well as topping the psychologically important $20 mark.