Crude oil prices continued to fall in Asia Wednesday as investor worries about shrinking demand at a time of already plentiful supply take a heavy toll.

Sentiment was extremely fragile in any case, with coronavirus shutdowns still in place across the world and worries growing about the possibility of a second infectious wave. Most equity bourses were deep in the red with haven assets much more in vogue.

The dramatic collapse seen in near-month US crude oil futures this week is spreading further down the calendar with June futures down below $12/barrel.

The production cuts proposed earlier this month have clearly come too late to save the market from a glut of petroleum with nowhere much to go. Storage tanks are reportedly close to capacity in the US and, with no likely pickup in demand coming anytime soon, prices are likely to remain under severe pressure.

Official inventory data from the US Department of Energy is due later in the session.

Gold prices were steady through the session, buoyed up as usual by crumbling risk appetite but capped, again as usually by the concomitant haven bid for the US Dollar which remains many investors’ lifeboat of choice.

The market remains vulnerable at its relative highs to liquidation trades made to cover losses elsewhere. The rest of the day’s economic data schedule seems unlikely to tear market attention away from the coronavirus headlines, although Canadian inflation data and Eurozone consumer confidence figures may rate a look. 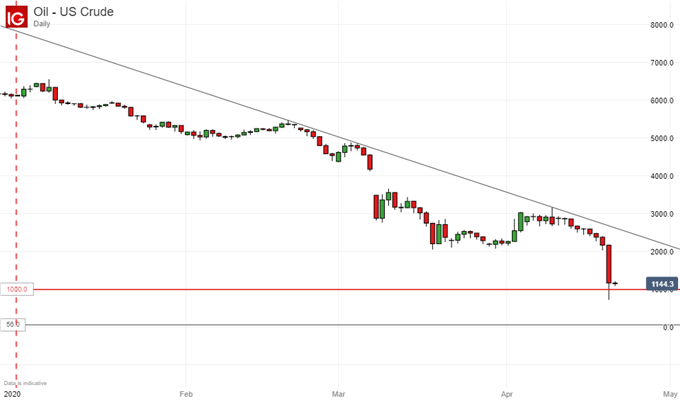 US Crude prices have retreated even further from their overall downtrend line and are now eyeing psychological support in the $10 area. It might be hard to overstate the bearish effects for all markets of a daily or weekly close below that point but it remains a present threat.

A spring back to the $20 handle would be reassuring, but there seem little sign of the impetus to provide it yet.

Gold prices have settled into a narrow range between $1673.90 and $1724.40. While the previously dominant uptrend channel has been broken to the downside, the impulse to take profit has been extremely muted even at these relatively high prices.

The lack of conviction in a more forthright upright move is perhaps surprising given widespread forecasts of global recession. Bank of America has reportedly raised its forecast to $3000/ounce over the next eighteen months in the face of ultra low interest rates.