Gold prices were lower in Tuesday’s Asia Pacific session, retreating a little from the strong gains made on Monday.

Risk appetite has been hit hard by US crude oil prices’ collapse, with most Asian stock markets lower through the session. That energy prices should be so weak despite heavy output cuts agreed this month only serves to underline the grievous economic hit expected from the coronavirus’ global spread.

All this might have been expected to support havens such as gold a little more but the stronger US Dollar suggests that it’s in the greenback, rather than in the metal, that fearful investors. The rest of the day’s economic calendar is thinly populated which means the market is likely to be left to its current, gloomy themes.

Crude oil prices remain close to the $20 mark despite the collapse of a futures contract into negative territory for the first time in history in the previous session. That contract expires on Tuesday but, with space to store oil now getting scarce thanks to a glut of supply meeting plummeting demand, it closed Monday at minus $37.63/barrel.

Clearly this does not mean that users can expect to be paid for taking oil away in any broader sense, but the underlying picture of demand and global growth is certainly worrying, as the coronavirus-linked lockdowns which underlie it will remain in place for an indefinite period.

Gold prices’ monthly chart shows what a period of strength April has been overall. Gains seen this month have cemented the rise above an uptrend channel previously dominant since November 2015 and put the peaks of October 2012 within bulls’ reach. Before this month that upside break had seemed tentative, with a couple of very narrow open-close ranges preceding it suggesting a degree of uncertainty.

April’s rise has lifted the market clear of those levels and, if it can consolidate above them, a test of those 2012 highs looks likely. That said risk appetite is volatile and gold can’t be relied on to make strong gains even when it wanes. 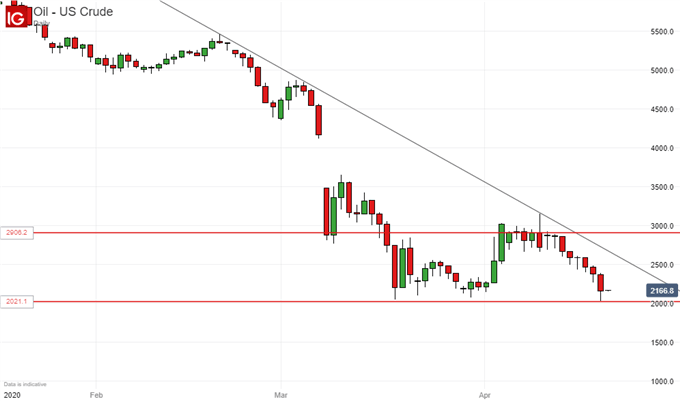 Prices continue to slide toward the psychological $20/barrel support area having put in a string of falls since April 14. Whether that considerable barrier can hold into the weekly and, more importantly, the monthly close could be very significant. It looks as thought he bears remain firmly in control of this market with the overarching daily chart downtrend still unchallenged. A sustained return back above $25 might change things but doesn’t look especially likely without some major good news out of left field.