Crude oil prices rose through Monday’s Asia Pacific session as investors clearly retain some hope that the price war between Russia and Saudi Arabia which has piled pressure on a market already wrecked by the coronavirus can be brought to an end.

Prices had been under pressure as the session got underway on reports that a meeting of the Organization of Petroleum Exporting Countries and allies including Russia, the so-called ‘OPEC Plus’ group, wouldn’t be held until Thursday. Hopes that it would happen on Monday of this week buoyed prices last.

However, while investors took the delay badly at first, they seem more sanguine now. The head of Russia’s sovereign wealth fund RDIF Kirill Dmitriev has reportedly said that his country and Saudi Araba are very, very close to an agreement on production cuts, and this has kept hopes alive in the story which will dominate energy markets probably for the rest of this week.

Clearly the coronavirus remains a huge threat to global economic prospects but there does seem to be a sense in the markets that the beatings taken by various risk-correlated assets as a result are sufficient in the absence of clear evidence that conditions are worsening.

The US Dollar’s strength is likely capping demand for the metal, however, even if gold’s underlying haven bid still looks strong. 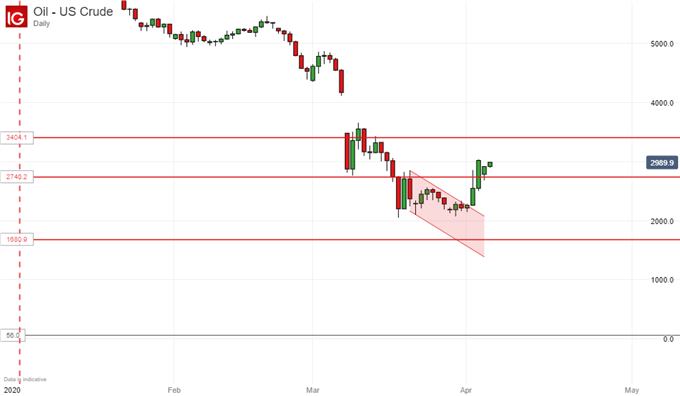 Prices have soared away from their former modest downtrend channel with five straight sessions of gains attesting to the turnaround in sentiment.

The market has also topped resistance at $27.40/barrel. That was the closing high of March 19 and the closing low of March 17. Still, the bulls don’t look too comfortable about that level yet. It now acts as near-term support with the old channel top at $21.30 lying in wait below. 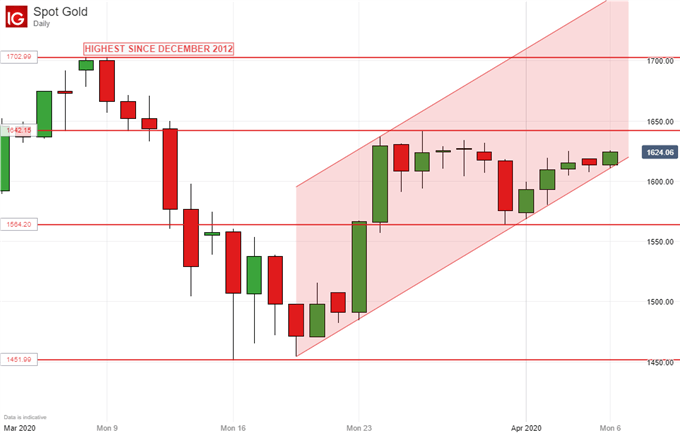 Gold prices are still respecting the lower boundary of their uptrend channel which is quite clearly still proving valuable as a support level indicator. The upper boundary may be less so now, having not faced a test since March 24

While the channel remains valid prices look to be range trading too within a broad band. That offers quite near-term resistance at $1642.15 which could be tested shortly if we see another daily close within the channel.