Gold Prices Lower As US Dollar Holds Up Amid Coronavirus Worries

Gold prices were lower in Thursday’s Asia Pacific trade despite clear concerns about the spread of coronavirus, notably in the United States, with a stronger Dollar dimming the metal’s appeal.

Investors have history of preferring to shelter in the US currency rather than gold during this crisis, with the inflation dampening effects of the contagion reducing appetite for the metal’s hedging properties.

Still, the underlying bid for all haven assets including precious metals remains unsurprisingly robust and is highly unlikely to diminish as investors await US unemployment-benefit claim data due later in the global day.

The staggering 3.2 million rise in initial claimants seen in the previous week’s data was arguably the most shattering news to date for the global economy, with investors now braced for more terrible numbers. The session will also bring news of the private, Challenger job cuts series, where good news is also highly unlikely.

Crude oil prices surged after US President Donald Trump said he expected a deal soon to end the price war between Saudi Arabia and Russia which has hammered oil prices in the past month.

The two export titans’ inability to agree on production cuts in response to the virus has seen the markets flooded with cheap crude that has no obvious final demand.

Trump said he had talked with leaders in both Moscow and Riyadh and believed that an arrangement would come in a few days to lower production and raise prices. 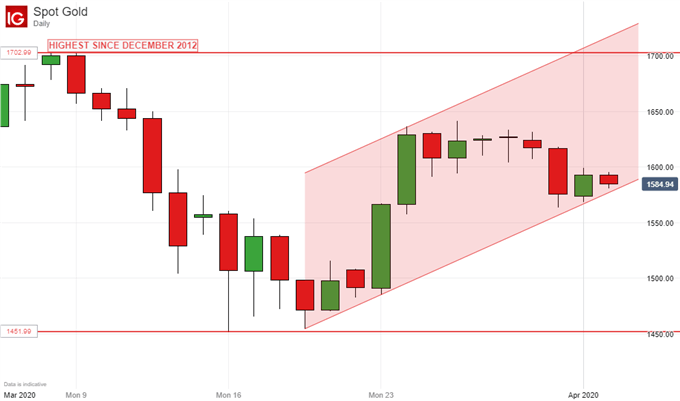 Prices are tracking a quite well respected uptrend line which now forms the basis of a nascent upward channel whose upper boundary is perhaps less useful predictively, having not been tested for more than a week. The upward channel does appear to be under some threat, with a conclusive break perhaps on a weekly close likely to put support in the $1550 area back in play, ahead of this month’s lows.

There seems little urgent appetite to push this though, with the market probably suspecting that any meaningful pullback will run into buyers in the current environment. 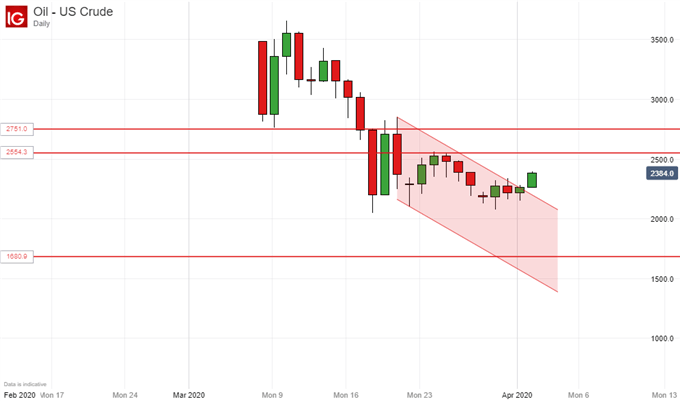 After days of rather lackluster and doubtful trading close to $20 lows, optimism that the Saudi/Russian deadlock might just break has seen prices rise above their former downtrend.

There are clearly still doubts aplenty though, with even nearby resistance at $25.54/barrel from March 24 still facing little in the way of significant challenge. That may be seen though if the current cautious optimism beds down in the European and North American sessions.

Even if it doesn’t, the market looks solid enough above $20/barrel for the moment, in the absence of more dire news.