Gold prices were lower in Wednesday’s Asia Pacific session as a broad uptick in risk sentiment boosted more growth-correlated assets, such as stocks, with investors hopeful that a massive US stimulus plan will soon pass Congress.

Senior US political figures from both sides of the aisle said on Tuesday that they were close to a Senate deal on the $2 trillion package aimed at limiting the coronavirus economic hit. The program could be voted on later Wednesday.

Still, the prospect of lower global borrowing costs for a very considerable period has eroded the opportunity cost of holding non-yielding gold and worries about the longer-term inflationary effects of money-printing stimulus will keep the oldest haven well supported. With many economies in some form of lockdown and business activity in effective freefall, the environment looks conducive to precious metals in general. That’s even if the sort of cashing out already seen this year at the highs, to cover losses in other markets will remain a present threat.

The rest of the day will see US durable good order data and UK inflation figures but, as both cover periods before the virus’ impact became severe, they may be deemed to historic for investors.

US stimulus package hopes also buoyed crude oil prices as the market looks ahead with some trepidation to weekly inventory numbers from the Department of Energy due for release after the Asian close. Surveys suggest that crude oil stockpiles are likely to have increased for the ninth successive week, although refined product stocks are thought to have fallen again.

Coronavirus worries aside the oil market remains beaten down by the ongoing price war between major exporters Saudi Arabia and Russia. The petroleum relationship between the two fell apart earlier this month when they were unable to agree on a production-cut response to the virus’ energy-demand hit. A durable rise in oil prices will probably have to await rapprochement, of which there’s little sign to data. 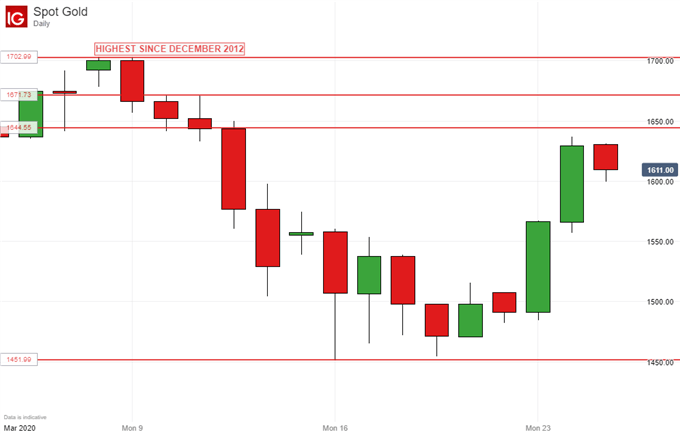 After two strong days of gains this week prices are back within $100/ounce of this month’s near-eight-year peaks. For the moment fundamental risk appetite seems to favor riskier assets, stopping gold’s rally short ahead of resistance at March 11’s daily close of $1671.73. That forms the lower boundary of a likely resistance band which guards the way back to the year’s high.

In the current environment daily reversals may well prove less steep than gains, with March 13’s intraday high of $1597.88 providing this market with near-term support. 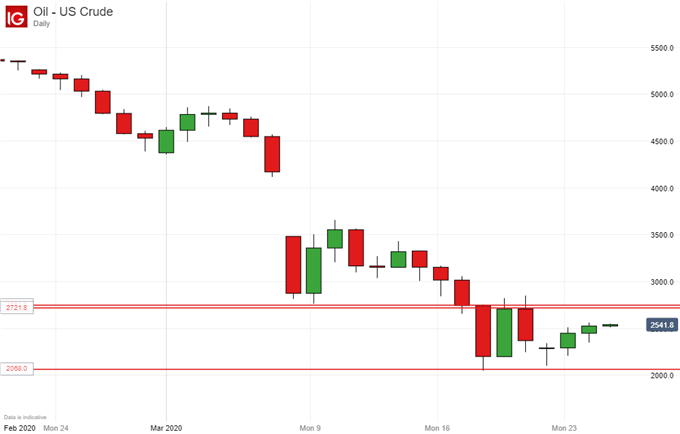 Crude oil prices continue to gain but the creep higher has been very gradual for the past three days. Fundamentally upside heroics are likely to remain scarce for as long as that Saudi/Russia price war rages, with the market vulnerable to a turnaround at any point on headlines from this story.

For the moment resistance at March 19’s intraday high of $27.21 continues to hover well above the market. If it can’t be reached by the end of the week then a leg lower back to support in the $20 area can’t be ruled out if overall risk sentiment sours again.