Crude oil prices rose in Friday’s Asia Pacific session as investors looked to possible US intervention in the price war between Saudi Arabia and Russia which has seen the market collapse this month.

Unable to agree on production cuts earlier this month as a response to the coronavirus’ devastating energy demand hit the two key swing exporters have been engaged in a game of chicken with the oil price which has taken it down to levels not seen since 2002.

However, in Thursday’s US hours President Donald Trump hinted that he could get involved in the price war at an unspecified ‘appropriate time.’ Prices were also supported by reports that regulators in key oil state Texas were considering lower production and also by US plans to supplement its emergency reserve.

Gold prices were higher as continued coronavirus-linked haven bids were reportedly for once not overwhelmed by investors’ need to cash out as has been the case often in the recent past.

Asia Pacific stock markets were higher too, however, following on from the Wall Street reprieve which came as various major economies unveiled monetary and fiscal stimulus plans.

The coming session is short of economic data and the virus story will remain dominant, but there may be some pause as investors digest personal income and spending figures out of the US for February. 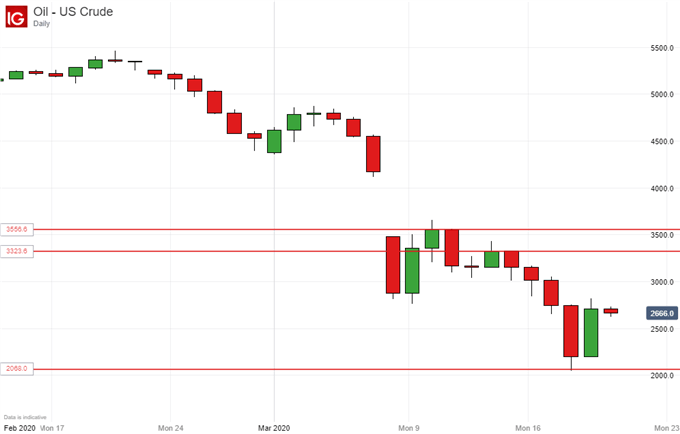 Prices likely face a band of daily-chart resistance between last Friday’s closing high of $33.24/barrel and March 10’s close of $35.57. Bulls will need to regain these levels, perhaps at minimum, if they’re to make meaningful progress back from this week’s falls and those 2002 lows.

It’s far from clear that they’ll be able to do this anytime soon however and, while it must be unlikely that the oil market as a whole will be able to tolerate $20 prices for very long, those lows could well be revisited in short order if this week’s close can’t get closer to that resistance band. 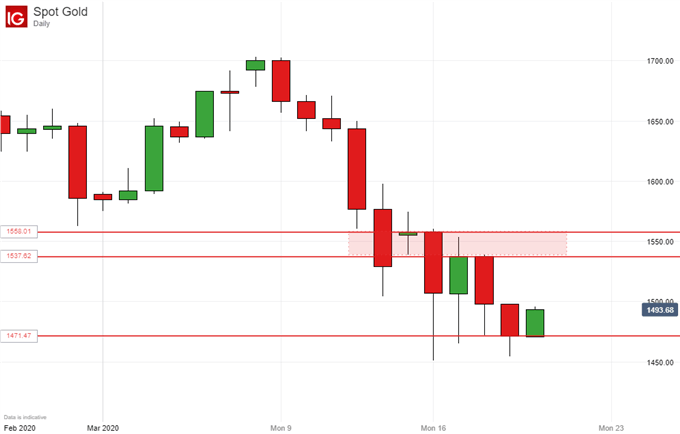 The gold price chart bears similarities to that of oil with a little nascent strength not so far looking anything like enough to take it back into more bullish territory.

In oil’s case a band of resistance guarding the psychologically important $1550/ounce area will need to be attempted if the market can build a base at current levels. That’s not impossible but the bulls have yet to leave this week’s three-month lows far enough behind them to preclude further falls.

$1450 seems to be providing reasonable support at present, with the market reluctant to probe below that in the past week. Friday’s closing action relative to this point may well prove instructive.