Gold prices weakened in Asia’s Thursday session with protection-seeking investors still inclined to seek refuge in the US Dollar rather than the oldest haven of all.

The metal has been falling steeply since March 9 with sales widely reported to cover cash losses in other stricken markets, notably equity which fell once again across the region. It’s still probable that widespread uncertainty is broadly underpinning the gold market, but the impulse to cash out has certainly taken a lot of froth from off the top.

Market sentiment got only a brief lift from Wednesday’s news that the European Central Bank was to instigate a EUR750 billion (US$820 billion) bond buying program in an attempt to cushion the eurozone from the worst effects of the coronavirus.

Thursday saw an expected interest rate cut from the Reserve Bank of Australia and the announcement of a major new funding facility from the Federal Reserve, both part of global efforts to protect economies.

The economic data schedule is sparsely filled for the rest of the session but markets will get a timely steer on the state of the US labor market in weekly jobless claimant figures.

Crude oil prices rose but that was perhaps unsurprising after an awful previous session which saw them fall to eighteen-year lows as investors increasingly fretted the effects of the virus on global energy demand, and the price war between Saudi Arabia and Russia engendered at least partly by the spread of the disease.

Effectively the contraction of both travel and broader business activity worldwide is coming as the two major exporters are preparing to increase production. The market looked extremely well-supplied even before the coronavirus hit. Now it looks set to be flooded with oil for which there may be no end use for months at best. 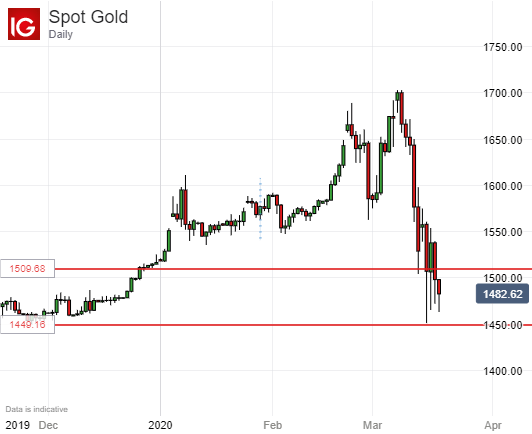 Prices have now retreated on a daily closing basis below the$1509.68 level which marks the 61.8% Fibonacci retracement of the rise from last November’s lows to the peaks of this year. They have in the past week touched full retracement on an intraday basis and, at $1449.15, that point now acts as quite near-term support. 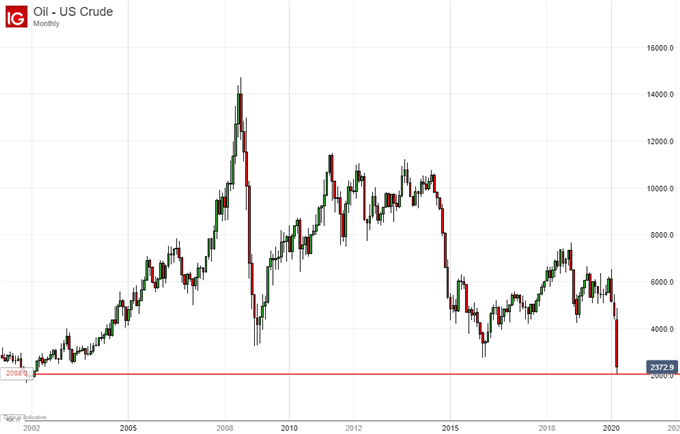 Prices are back to lows not seen since early 2002 having shed more than $20/barrel this month alone. There seems little chance of any near-term respite for the commodity either, with support below that at $16.41 from November 2001.

On a fundamental basis it seems unlikely that producers could long tolerate sub-$20 prices, but they could be an imminent reality nonetheless.