Gold prices were higher on Monday with the coronavirus story still in firm command of all financial markets.

Investor appetite has been whetted for a reduction in global borrowing costs to try and offset the contagion’s increasing economic drag and, while this prospect has supported some riskier assets, lower interest rates also tend to burnish the case for holding non-yielding gold.

Federal Reserve Chair Jerome Powell said on Friday that the virus posed ‘an evolving risk’ and that the central bank stood ready to take action if needed. That risk is already highly evolved in China. Monday’s snapshot of the private manufacturing sector there found output at its lowest level since comparable records began in 2004. This followed the weekend’s release of even weaker similar numbers from larger, state-controlled concerns.

Similar Purchasing Managers Index data from Canada and the Institute for Supply Management in the United States will be watched as Monday session goes on.

Hopes of monetary stimulus also saw crude oil prices bounce back higher, with this month’s looming meeting of the Organization of Petroleum Exporting Countries and allies including Russia also very much in focus.

Given the increased impact of the coronavirus on all the major engines of global growth, markets now hope that these traditional producers will lengthen and, perhaps, deepen the production cuts agreed last year.

Several participating states are reportedly considering additional reductions totalling a million barrels per day. If they come, these cuts would be added to the 1.7 million barrels already trimmed last year in a deal which runs until the end of this month.

The OPEC meeting will take place on Thursday and Friday at its Vienna headquarters. 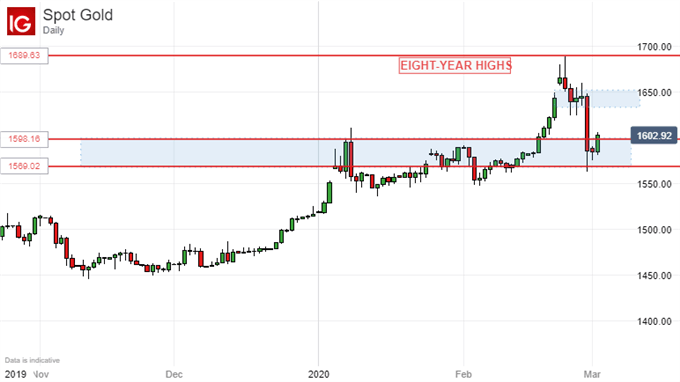 Prices have bounced at a trading band defined by the 38.2% and 50% retracements of the rise up from November’s lows to this year’s notable peaks. Near-term support in this area seems likely to be very considerable given that the market has been reluctant to go far below it for much of 2020. Bulls are currently attempting to get back above the upper limit of this band which comes in at $1598.16/ounce. If they can’t the rises of the past two weeks up to new eight-year highs may start to look a little spurious but the market will remain well supported nearby.

US crude oil prices remain very much within the well-respected daily-chart downtrend that’s dominated trade all year. The fundamentals are in command, with those production-cut hopes boosting the market back into a resistance band formed from last year’s lows.

The channel offers support at $42.55 which seems likely to hold, while increased optimism in this market could see at least the falls from the last significant high clawed back. That was February 20’s intraday top of $54.58.