Crude oil prices were lower in Friday’s Asian trade and on track for a weekly fall of well over 10%, as the coronavirus worries which crushed Wall Street in the previous session continued to hammer such risk-correlated markets

The virus continues to spread with first infections discovered in New Zealand and a case of unknown origin recorded in the United States. Investors increasingly worry that the outbreak will become a pandemic which could threaten global recession according to a large and growing group of market watchers.

Energy markets still strongly suspect that production cuts will be coming in March from traditional producers in the Organization of Petroleum Exporting Countries and allies including Russia. However, given the magnitude of this week’s stock market falls it’s now becoming more doubtful that even these will be able to raise prices meaningfully in the face of falling demand and plentiful supply from non-OPEC sources.

Perhaps surprisingly gold prices slipped a little through the session, despite the strength of other counter-cyclical haven assets like the Japanese Yen and Swiss Franc. The precious metal remains well supported close to the eight-year highs registered early next week and, like those other assets, seems highly unlikely to see meaningful falls while the virus runs its course.

However, the market looks consolidative, after a rise of nearly $200/ounce this year, even if a push higher looks likely once that process ends.

Crude oil prices continue to track lower within this year’s well-established daily chart downtrend channel. The bears are probing the lower levels of a support band from January 2019 and where it closes out Friday’s session will be interesting from both a weekly and monthly closing perspective.

A close below the line will bring channel support at $43.45 into focus but that point might not be sustainably reached until OPEC’s plans are apparent. 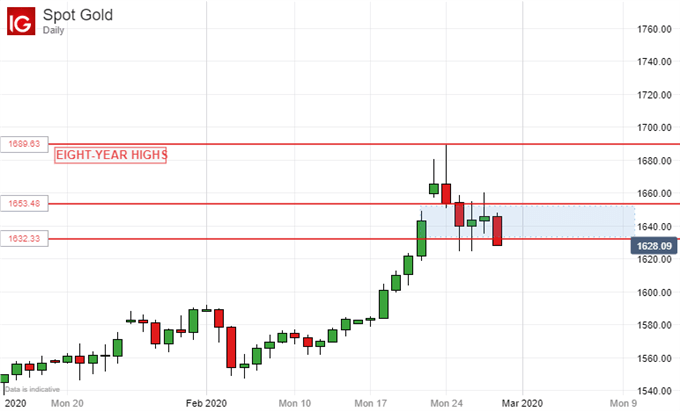 Gold prices are flirting with the $1632.33 mark that coincides with the first, 23.6% Fibanacci retracement of the rise from November’s lows. A break below this on a monthly close could see a deeper pullback in prospect, perhaps as far as the $1590 area where the market topped out on January 6 and 31. However it looks very unlikely that gold’s fundamental bid will be eroded much beyond that point for as long as the coronavirus story is dominant, with continued gains still the most likely outcome once consolidation is past.