Gold prices climbed once again in Thursday’s Asia Pacific session as the coronavirus’ spread beyond China continued to shake markets, with conviction growing that its economic impact will be considerable.

US President Donald Trump made a speech on the subject aimed at reassuring Americans that the country will respond robustly and effectively to protect them from the outbreak. However, after days of heavy stock market falls, financial markets clearly expected more. Gold was among the counter-cyclical haven assets to make gains after Trump spoke.

The interest-rate environment worldwide is now more friendly to the non-yielding metal, with forecasts of lower borrowing costs ahead this year proliferating, including in the US. Treasury yields have already touched all-time lows in some cases.

For the rest of Thursday markets will look ahead to US durable goods order data. Much hope is now pinned on the US consumer as a growth engine with China mired in virus-related shutdowns and Europe growing only fitfully even before the disease hit.

An official revision to Gross Domestic Product numbers for the final quarter of 2019 is also coming up. The market sees growth unchanged at 2.1% annualized.

Crude oil prices looked set for a fifth day of falls, returning Thursday to their lowest point since January 2019 as investors fretted the impact of the disease on demand for energy.

US crude oil stockpiles rose by more than expected in the week to February 21, according to data from the Energy Information Administration released on Wednesday, while the market still hopes that next month will bring production cuts from the Organization of Petroleum Exporting Countries and allies including Russia, the so-called ‘OPEC Plus’ group.

Neither of these factors seemed especially supportive for the market through the Asian session however. 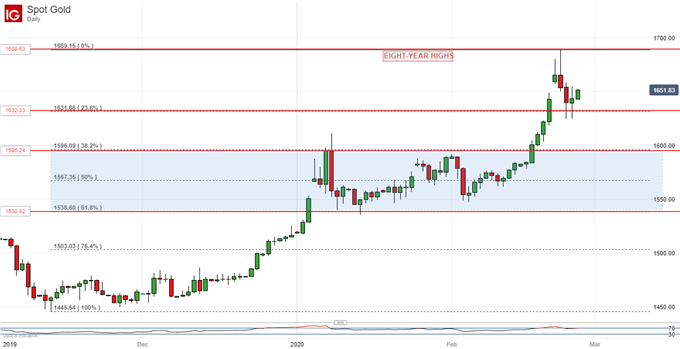 Prices remain below last week’s eight-year high but their consolidation below that point has not taken them down very far and the market looks increasingly comfortable with the steep gains of the past two weeks.

The first, 23.6% Fibonacci retracement of the rise from November’s lows remains unchallenged on a daily closing basis even though it has been broken to the downside intraday on two occasions this week. A break below would find very strong support at the broad trading band which defined market action between January 3 and February 18. 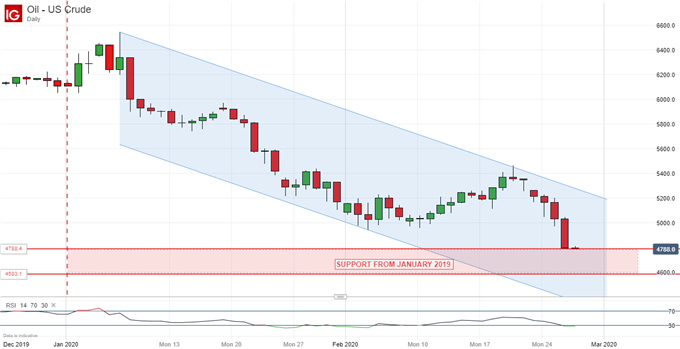 US crude oil prices remain within a well-established downtrend channel from this year’s highs, with this week’s very sharp falls putting focus firmly on the lower boundary. However, between that and the market is a band of support from January 2019 which seems to be holding the bears at the moment.

Further gloomy coronavirus headlines would likely see that support band give way, but the market may well be stuck around current levels until OPEC’s March meeting next week.