Crude oil prices were more resilient than those of equity through Asia’s Wednesday, sliding only modestly as stock markets in most cases notched up further heavy, coronavirus-linked falls. Still, the price of US crude dropped through the psychologically important $50/barrel level during the session.

Hopes of production cuts next month from Organization of Petroleum Exporting Countries and allies including Russia, the so-called ‘OPEC Plus’ group, may be helping to avert further falls but the market seems increasingly worried about reductions in demand for energy linked to the virus’ spread.

Markets had suspected that this alliance might convene earlier than its scheduled March conclave. That now seems unlikely but Saudi Arabia’s Energy Minister Prince Abdulaziz bin Salman reportedly said Tuesday that he was confident of the group’s responsible response to the contagion’s economic effects. The group will meet in Vienna on March 5 and 6.

Prices may also have been supported by ongoing falls in Libyan output thanks to a blockade of its ports as a result of ongoing factional strife.

The broad market will now look to crude oil inventory data due from the Department of Energy later in the session.

Gold prices rose through the session as the coronavirus continued to underpin a strong bid for all such countercyclical assets. US Treasury yields move inversely to prices and have in some cases hit record lows.

Miserly yields on other safe assets usually support the case for owning gold as the metal famously yields nothing at all.

The US government warned its people to begin preparing for the spread of the disease in the country as cases increased in countries as diverse as South Korea, Italy and Iran. 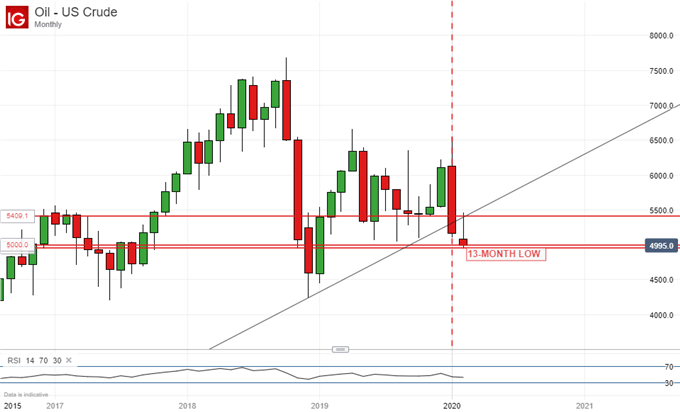 US crude oil prices have returned to the 13-month lows seen earlier this month and have wilted below the uptrend from December 2018 on their monthly chart.

Bears may not be inclined to push prices too much lower until they’ve seen OPEC’s proposals, and that organization seems unlikely to tolerate sub-$50 prices for an extended period. Still, as a growth correlated asset oil is very likely to stay under fundamental pressure as long as coronavirus continues to spread. 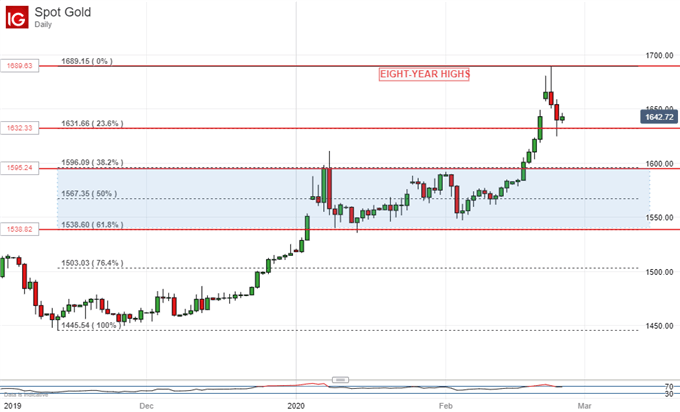 Gold prices continue to retrace from the eight-year highs seen earlier this week but the bears are struggling to assert themselves with even the first, 23.6% Fibonacci retracement of the rise from mid-November’s lows holding so far.

The market remains slightly overbought, however, and its current period of consolidation may well have further to run. Even if it does, support is likely to be resolute in the trading band which endured between January 3 and February 18 and which now comes in between the second and fourth retracement points.