Crude oil prices were lower on Monday as investors digested more headlines attesting to the coronavirus’ spread around the world and worried about what’s likely to be an ongoing hit to energy demand as a result.

South Korea’s government announced the highest level of health-risk alert. Italy said a third person had died from the illness with cases up to over a hundred, from single figures just last week. However, Chinese local health commissions said that four provinces had been able to lower their own emergency response levels

In more oil-specific news the weekend brought a report that the US oil-rig count had grown for a third straight month with 679 rigs now operative. That’s the highest total since the week of December 20.

The Wall Street Journal reported on Friday that Saudi Arabia is weighing a break of its relations with Russia. The two major energy exporters have failed to reach agreement about reducing production in response to the outbreak, with their apparently crumbling relationship increasing market uncertainty.

The rest of the session is a little short of major, scheduled economic news which will probably leave the coronavirus story very much in charge.

Gold prices continued to benefit from the traditional anti-growth, haven bid which saw them rise on Monday to new highs not seen since February 2013.

The US Dollar benefits from a similar buying impulse, however, with its strength doubtless weighing on Dollar-denominated gold products.

The World Health Organization’s comment that the growing number of coronavirus cases without any link to China worried it has continued to support assets like gold and seems likely to underpin their strong gains for some time. 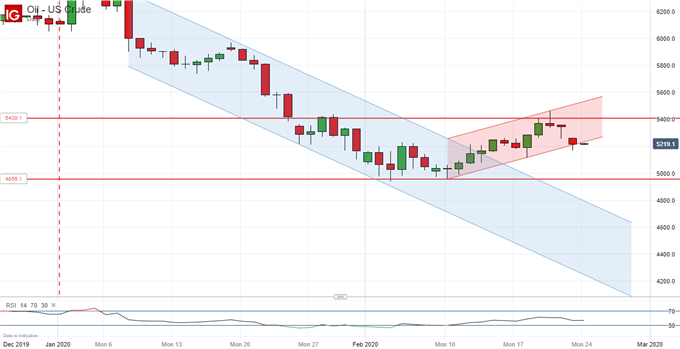 US crude oil prices are challenging the base of the modest uptrend channel which has marked their rise from the lows of early February.

Those lows are now back in focus as support, however, with market doubts about both demand and effective production cuts keeping prices under fundamental pressure. The market has yet to see a daily close outside that upward channel but one looks extremely likely this week and should be watched for.

The rise has so far stopped short of key resistance from January 28 at $54.09.barrel and that seems an effective near-term market cap. 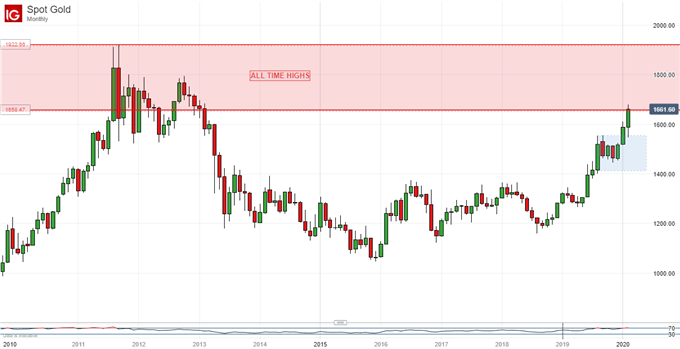 Gold prices have just seen two very strong months which have taken them back very close to the region which marked this market’s all-time highs back between 2011 and 2013. The coronavirus has so far added about $160 to the price of an ounce of gold, seeing the market soar above the seven-year highs seen in the last quarter of 2019.

While these gains are probably vulnerable to any signs that coronavirus has peaked globally, that news seems unlikely to come in the near future. This probably means gold will retain its bid and edge up into the area which guards those all-time highs.

Near-term chart support is quite hard to spot given the speed of gold’s rise, but the area between the former notable high (January 8’s $1610.36) and the $1574 region where the market topped out on February 9 may contain the bears.