Equity markets bounced back strongly, notably in China where they fell sharply in the previous session. While coronavirus’ contagious character is beyond doubt, it has proved to have notably lower fatality rates than other diseases, such as Severe Acute Respiratory Syndrome (SARS) which roiled markets in 2003.

Hopes that this will remain the case seem to be supporting growth-correlated assets quite broadly and oil in particular.

In any case China’s central bank has undertaken to provide extra liquidity in an attempt to offset the worst economic effects of the outbreak and such action usually cheers markets.

Closer to the energy market specifically, Reuters reported on Monday citing four sources that the Organization of Petroleum Exporting Countries and others, including Russia, the so-called ‘OPEC-Plus group’ were considering cutting daily production by half a million barrels due to the virus’ impact on likely demand.

Assuming the broad news headlines will permit, the market will look ahead to US durable goods orders as the next likely temperature gauge of the world’s biggest economy. Various employment numbers are coming up this week, culminating in Friday’s release of official nonfarm payrolls data.

Gold prices edged lower through the session as risk appetite held up quite well.

The US Dollar managed its biggest gain against major traded rivals for more than a month on Monday as factory activity rebounded in January after months in the doldrums. New orders picked up very nicely.

Reduced appetite for counter-cyclical assets and a bid for the Dollar usually tend to weigh on gold prices and this held true on Tuesday. However it remains difficult to see the yellow metal heading meaningfully lower for as long as the coronavirus continues to spread.

Prices have fallen below $51.58/barrel. That’s the 61.8% retracement of the rise seen between December 2018 and April 2019. If this point can’t be regained, then the 76.4% reversal at $48.08 will beckon and is likely to be revisited in short order of the psychological $50 mark gives way on a daily or weekly close.

If it is then the entire rise from the $42 handle will be back in doubt, but fundamentals are driving this market and it’s very possible that talk of further production cuts will get louder as $50 gets closer. 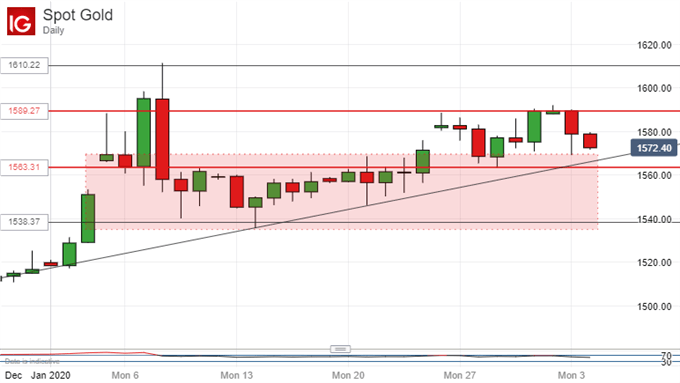 Prices seem to have rejected a test of their current range top on the daily chart, but the former trading band just below it looks solid enough still, and the uptrend from January is also in place. If Tuesday’s return to confidence in stock markets becomes a little more entrenched that uptrend could face a test before week’s end however. It now provides support not far below the market at $1566.41/ounce.

If that should give way it might be a sign that the upper reaches of gold’s virus-related safety bid won’t be seen again anytime soon, but it remains difficult to see any near-term test of the range base at $1538.37.