Crude oil prices were steady through Wednesday’s Asia-Pacific session with the market like all others looking toward the day’s main business: the signing of an interim trade deal between China and the United States scheduled to take place in Washington DC.

Despite some rational optimism that improved economic relations between the world’s two largest national economies will lead to higher energy demand, oil prices have retreated very sharply since peaking out at eight-month highs on January 6. The market added substantial risk premium after the killing by the US of key Iranian General Qassem Soleimani. But the stripping out of that premium has been perhaps surprisingly sharp for a market ostensibly looking to increased demand at a time when traditional producers are limiting supply. Russian news agency Tass reported that the Organization of Petroleum Exporting Countries and others, including Russia, the so-called ‘OPEC Plus’ group, want to postpone a decision on maintaining production cuts until June, from March.

Investors already feel they know much of what will be in the interim accord for hydrocarbon markets before the fact, with a putative Chinese commitment to buy $50 billions’ worth of energy from the US over two years already widely reported as part of the deal.

Still, the wait for that trade deal signoff will probably dominate the market at least through the European session, although there are some points of likely market interest beyond it. German Gross Domestic Product data for 2019 are coming up. The forecast 0.6% annualized rise would be well under half 2018’s gain. Closer to the oil market Department of Energy stockpile numbers are also coming up. The market is looking for a modest drawdown according to Reuters’ survey.

Gold prices picked up a little on Wednesday, continuing the modest recovery seen since Tuesday’s lows. Prices have also fallen sharply as the markets move to price out the risk of military escalation between the US and Iran, but they remain quite close to 2019’s highs even as trade optimism rises.

Reuters reported US Treasury Secretary Steven Mnuchin as saying that tariffs will remain on Chinese goods until a more substantive, phase two trade deal is agreed and this too may be supporting the gold price.

The underlying prognosis that global interest rates seem likely to remain very low by historical standards through 2020 continues to provide this market with its fundamental underpinning, even if a crowd-pleasing US-China trade deal could see prices head lower. 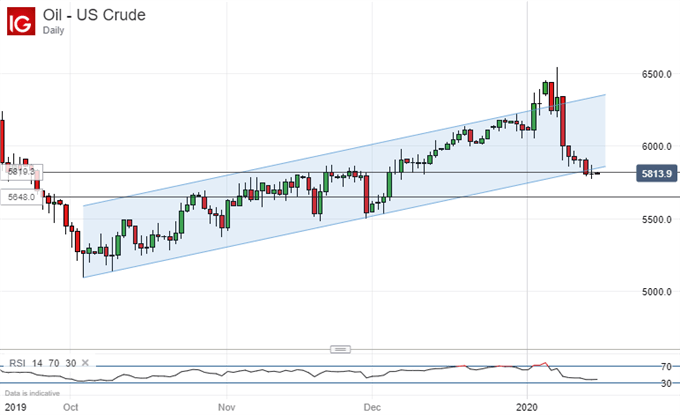 Prices have edged below both their medium-term uptrend channel and also 50% Fibonacci retracement of the rise from October to January.

They have not yet done with any conviction however, with Wednesday’s close promising to be interesting on this chart. Weakness could see the 61.8% retracement point come into view at $56.48/barrel but there’s plenty of support from last November between the two Fibonacci levels and a test of the lower bound looks unlikely in the near term.

Gold prices are holding on, just, above the broad range which formerly dominated proceedings between August 2019 and January this year. 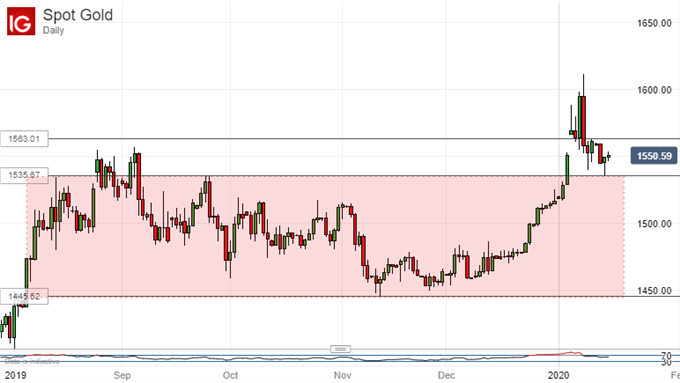 Tuesday’s bounce at the upper bound of this range has seen the bulls attempt to build a new higher range above it but, given the struggle the market has had to remain for long at this altitude, it seems likely that the price will retreat back into its former band, at least for as long as risk appetite holds up.