Crude oil prices slipped very slightly through Thursday’s Asia Pacific session. Overall risk appetite appeared to hold up well, despite the landing of more Iranian rickets on Baghdad’s Green Zone, as investors now seem more confident that a full-scale conflict between Iran and the US will be avoided.

US President Donald Trump said on Wednesday that Iran appeared to be ‘standing down,’ but his assertion that Washington would increase sanctions on Tehran seems to have reassured investors that the US will try to steer a non-military course.

Indeed Trump said a military response to Iran’s attacks was not necessarily the way the US would go, while Iranian Foreign Minister Mohammed Zarif said the strikes ‘concluded’ his government’s response to the killing of Qassim Soleimani.

Crude oil stocks in the US unexpectedly rose by 1.2 million barrels in the week to January 3, confounding analysts who had looked for another strong slide, having been blindsided by sharp falls for three weeks.

The market had been well supported into the end of 2019 by hopes for increased global energy demand just as traditional producers are limiting supply. This dynamic will continue to be important, but the market does seem to be shedding just a little of the premium built into prices over the past week or so.

US prices have backtracked sharply from January 7’s eight-month peaks and have also abandoned the psychologically important $60/barrel mark. 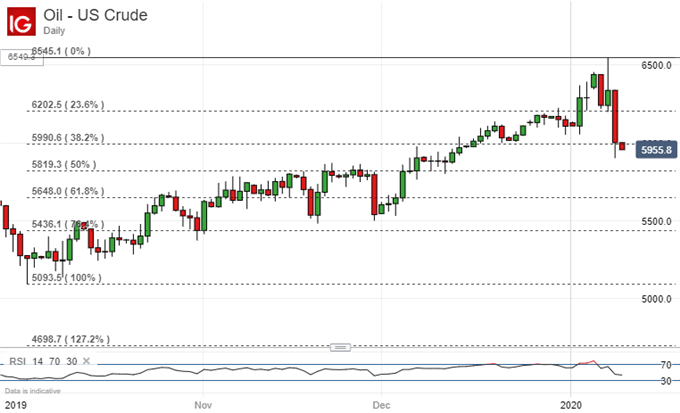 Prices also dropped quite easily through the first, 23.6% Fibonacci retracement of the rise up from October’s lows to that January peak.

The 38.2% retracement at $59.91 has also given way, but only just and not yet on a daily closing basis, although it may do so as Thursday goes on. Should it also be conclusively abandoned then support at $58.19 will come into view, but the market is now drifting into short-term oversold territory and the bulls may feel emboldened to defend that second retracement level in the absence of any obvious bearish news this week.

Gold prices were steady through much of the Asian day, retaining an underlying bid despite signs of revival in risk appetite elsewhere. However, they slipped as the European markets returned to the fray, with stocks expected to start trading with modest gains.

The remainder of the day is short of first-tier economic data however which may leave the Iran story to drive markets with risk appetite likely still fragile.

Prices remain close to the top of the monthly-chart uptrend channel which has been in place since December 2015. 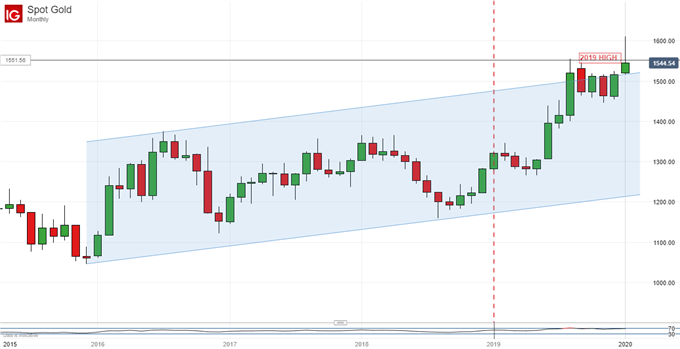 The break above this seen sporadically since August looks slightly spurious and prices could merely be in the process of confirming this channel’s validity as a longer-term market guide. With that in mind this month’s close could be especially interesting with prices currently above the channel top, but a close there far from certain.

Even if they come back within the channel, it’s notable that test of the lower bound will still not have occurred since August 2018, and an upside bias will remain.