Gold prices retreated on Tuesday, as did those of oil. Antagonism between Iran and the US still clearly hovers over the market, but Wall Street equity investors managed to gird themselves in the previous session, sending stocks higher on the hope that corporate profits and economic growth won’t take much of a hit in the longer term.

Prices for the yellow metal reached seven-year highs on Monday but, while the markets clearly remain on watch, they saw no reason to chase it higher through Tuesday’s Asia Pacific session which saw most main equity indexes post gains.

The new year’s economic data round gets back into full swing on Tuesday. Eurozone consumer price inflation data coming up, before durable goods order numbers out of the US, and the service sector Purchasing Managers Index from the Institute for Supply Management. All these should grab investor attention assuming no escalation in the Middle East.

Prices rose so fast last week, in a market which was already looking overbought, so durable near-term support is quite hard to spot. 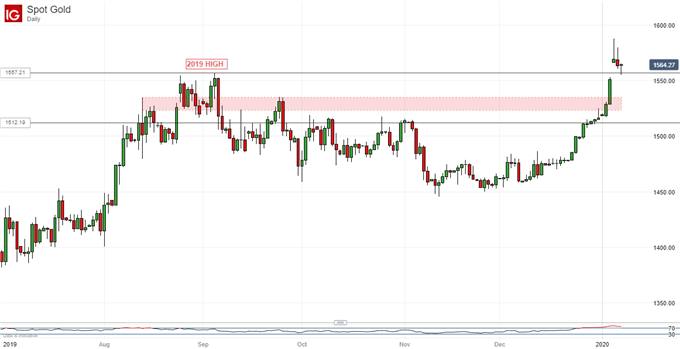 2019’s high at $1557.21/ounce was broken through at the end of last week. The market remains above it, just, but that level doesn’t seem likely to offer much of a test should the bears force a deeper retreat. They may well do so in the absence of any escalation in the Middle East, and it could be as well if they do as this market looks in dire need of some consolidation.

Below that support is the modest range which capped progress before the Iran story broke, between $1534.62 and $1523.94. That may offer a sterner test for any bearish plays, with initial 23.6% Fibonacci retracement of the rise from May to this week’s highs waiting below that at $1512.19.

It will take a truly remarkable return of risk appetite to see this threatened in the short term.

Meanwhile, crude oil prices steadied in the Asian session having slipped back through the US Monday.

Of course, investors are aware that Iran has promised retaliation for last week’s US airstrikes in Baghdad, and that that may involve some danger to energy infrastructure around the crucial Straits of Hormuz, but, in the absence of further detail here, focus returned at least in some measure to more usual market drivers.

The Organization of Petroleum Exporting Countries (OPEC) pumped 50,000 fewer barrels per day in December, Reuters data showed, with a fourth week of US crude-stockpile drawdowns expected in the week to January 3. The Department of Energy will release the numbers on Wednesday. 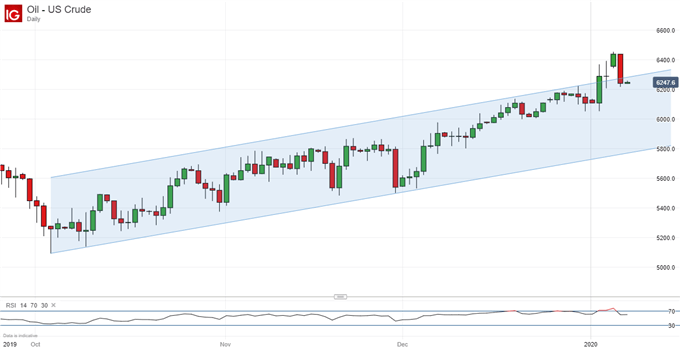 As the daily chart shows, Iran-related buying has only very slightly exacerbated the pre-existing uptrend which was founded both in prospects for reduced supply and hopes for a demand revival if the US and China can get a trade deal signed.

A phase one agreement remains set for signing on January 15, although it seems unlikely that this will amount to much more than an end to the tariff war which marked much of 2019.

Still, any signs that the two sides are committed to a deeper future deal may well support the oil market from the fundamental angle. Technically Monday’s US price slide has just seen the benchmark move back within the dominant uptrend channel. That hasn’t faced a serious test of its lower boundary since December 2 and it looks set to remain in place, with 2019’s April peak of $66.55/barrel in sight as the next upside target.