Crude oil prices have risen by nearly four dollars a barrel since Friday as markets fret heightened tensions between the United States and Iran.

Thursday’s killing of Iranian military leader Qasem Soleimani in a US airstrike in Iraq has prompted Tehran to say it will no longer respect uranium enrichment restrictions contained in the nuclear deal signed in 2015. Iran has vowed to retaliate against the US and markets are like everyone else on watch to see what form this retaliation will take. Saudi Arabia and Iraq are the two larges producers in the Organization of Petroleum Exporting Countries and both could be in Iran’s sights.

Given the proximity of so much of the world’s oil supplies and their trade routes, it’s hardly surprising that crude should catch a bit. The US benchmark is back up to highs not seen since May 2019, having surged last week above its previously dominant uptrend channel. 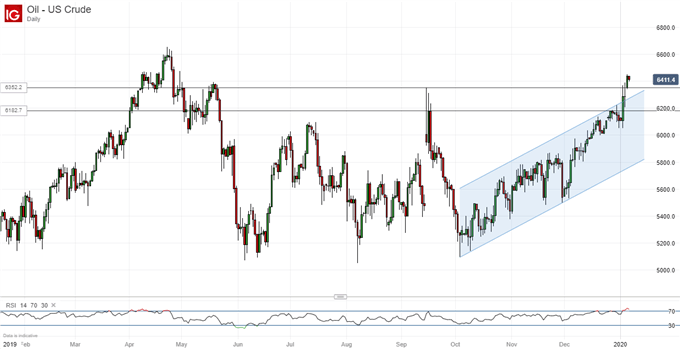 Oil is starting to look extremely overbought, but, with no sign of any climbdown from either Tehran or Washington, it seems safe to assume that the fundamentals will drive this market for some time yet and that that will in turn see prices continue to gain.

January 15 remains the date penciled in for the signing of a phase one trade accord between China and the US. Prospects for this have been behind much of oil’s rise until last week. There may be scope for disappointment in the details of what is likely after all to be little more than a trade war truce, but the Iran story may paper over this.

Gold prices soared unsurprisingly, hitting their highest point in seven years on Monday as investors piled into counter-cyclical haven assets. Palladium hit an all-time peak of $2,011.48/ounce. As with oil prices for gold look a little stretched but it seems doubtful that demand will retreat meaningfully while the US-Iran story remains unresolved

Prices are also underpinned by the latest commentary from tge US Federal Reserve, suggesting that interest rates may not move for some time. 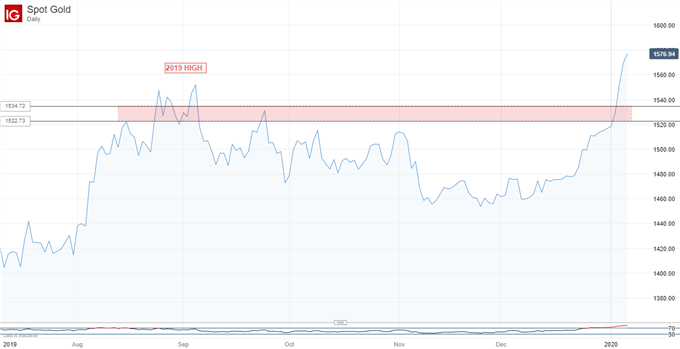 Prices have smashed above the resistance zone which had capped them until last week. They’ve also surged far above 2019’s peaks. Those peaks are now in place as near-term support, with any consolidation likely to take the market back down to the $1530 area.

The first 23.6% Fibonacci retracement of the rise up from May’s lows to the current peaks comes in a whisker above$1500/ounce. That’s well below the current market and unlikely to be tested unless current fundamental worries ebb.