Crude oil prices remained close to three-month highs on Tuesday but beyond that barely moved in a session which saw most major financial markets in the Asia Pacific region either closed or ending business early for the new year break.

Prices have been boosted since October by increased optimism on US-China trade relations. Moves to deepen and extend production cuts by the Organization of Petroleum Exporting Countries, and others like Russia, have also helped the bulls’ cause.

This week US air strikes against Iranian-backed militias in Syria and Iraq have put Middle Eastern geopolitics back front and center, with Libya also in the mix. Its state oil firm said on Monday that the closure of Zawiya Port and the evacuation of its refinery were under consideration thanks to armed clashes nearby.

There may have been some support for the market on Tuesday following news that December saw China’s very modest manufacturing expansion continue for a second month.

The market remains overwhelmingly focused on trade as the year ends, with reports suggesting that an interim phase one deal between Washington and Beijing could be signed within days. 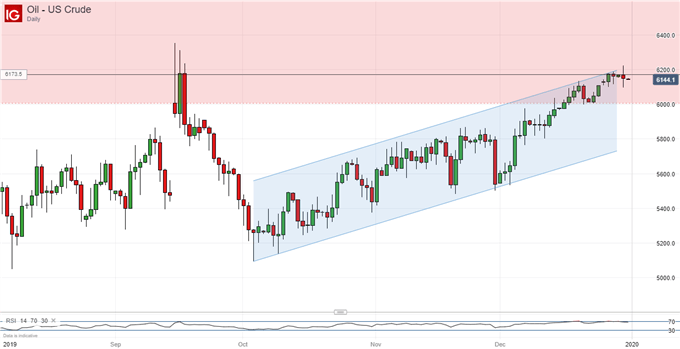 The uptrend channel from early October remains well in place. With prices testing the upper boundary some investors may draw comfort from the fact that the holiday season has seen no major profit-taking impulse, suggesting in turn that the climb higher may resume once trading levels get back to normal.

For the shorter-term however the price looks stuck between September’s highs, at which the latest rally seems to be topping out, and the lows of last week at $59.97.

Stock markets in the US may still be close to record highs but the concurrent rise of anti-risk assets like gold is certainly notable too. 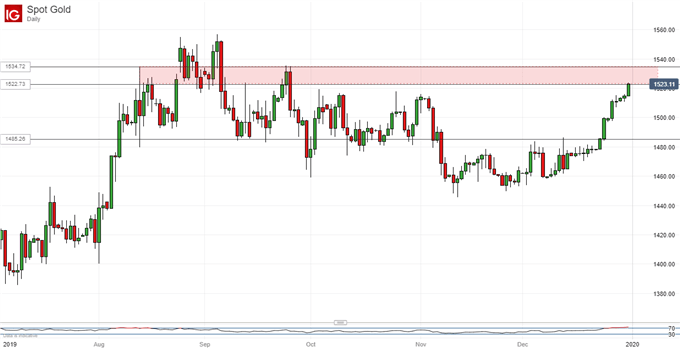 Rising since mid-November prices have smashed back above the first 23.6% retracement of the rise up from May’s lows to September highs. That came in at $1485.26 and was broken above on December 24. Since then gold has forged on, up to peaks not seen since late September.

For now bulls are struggling with a band of resistance immediately above the market which guards the way back to those peaks. With gold now looking extremely overbought it will be difficult to trust in the durability of any further near-term gains. That said the same lack of obvious profit-taking seen in the oil market suggests that investors have not abandoned hope of more upside once 2020 trade gets under way.

There’s not much fight left in 2019 as far as economic data are concerned but Tuesday’s US house price and consumer confidence numbers may yet command attention.