Gold prices edged up through Monday’s Asia Pacific morning with risk appetite defensive despite more record highs for Wall Street last week. News of US airstrikes against Iranian-backed militia in Syria and Iraq have reminded trade-war obsessed markets of Middle Eastern geopolitics as the year fades out.

US officials said on Sunday that the attacks had been successful but cautioned that more might be taken in defense of national interests.

Local stock markets inched down in what will be the last full trading day of 2020 for many of them before new year holiday closures.

Gold prices have risen nearly 20% this year, mainly thanks to trade tensions between China and the US, and worries about what their trade dispute might do to economic growth. These worries have heightened suspicions that global interest rates will either fall or hold close to what are often record lows, burnishing the comparative appeal of non-yielding gold.

While risk appetite has perked up with the prospect of a ‘phase one’ deal between the two global titans, the haven bid for gold endures. 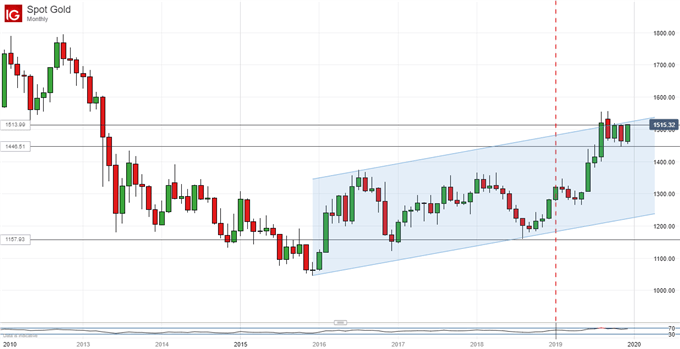 Prices have risen for eight of 2019’s twelve months, but they have retreated from the six-year highs made in April, a month which actually saw sharp falls. Moreover, the clear upward progression seen since the lows of December 2015 has clearly stalled, confining monthly-chart prices to a trading band which marks further partial claw-back of the steep falls seen between 2012 and those lows.

It seems likely that further friendly fundamental developments on the trade front will make life tougher for gold and may force a test of the range base at $1446.51 early in 2020. However, for as long as global interest rates remain low, retracement seems likely to be gradual.

Crude oil prices also rose, although it’s tempting to suggest that in more usual market conditions they might have gained further. Those US air-strikes played their part, as did protests in southern Iraq Sunday which forced the closure of the Nassiriya oilfield. Last week’s news of a larger than expected fall in US stocks was supportive too.

Crude stockpiles fell by 5.5 million barrels in the week to December 20, knocking the markets’ expectation of a 1.7 million barrel fall out of the park.

Financial markets will look to official US trade data for the remainder of Monday, and pending home-sales data, but there’s little else of likely broad interest on the calendar. 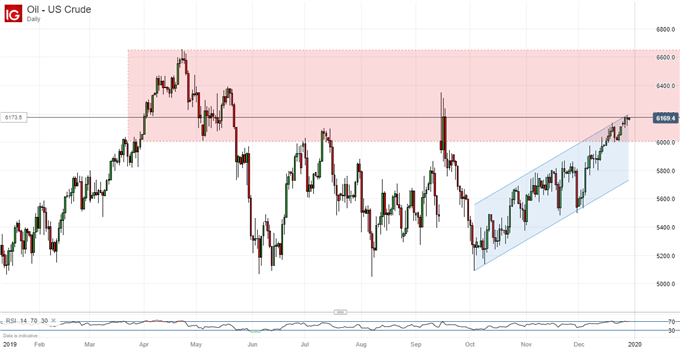 Prices have held up well into the holiday season with a lack of profit-taking impetus suggesting that investors think this market has more to give.

Oil is now back into the resistance zone which guards 2019’s peaks, having risen quite consistently though December. Unsurprisingly the commodity is starting to look a little overbought but there’s little to suggest that any likely consolidation needs to break the overall uptrend.

Bulls’ first order of business will probably be to try and retake the previous significant high, September 15’s $63.42 intraday top. However, any near-term attempt at this would see the market extremely stretched and unlikely to hold its gains as a result. With that in mind it may be best to await that consolidation before banking on it.