Crude oil prices rose to three-month highs once again in the Asia Pacific region as data in the previous session showed record online holiday splurging from US consumers even as the long-hoped-for signing of a phase one trade deal with China looms.

There were some worries still hanging over the markets. Japanese numbers showed that industrial output shrank for a second straight month in November and worries still linger over the huge drop in similar figures for bellwether Singapore released earlier this week.

Still, these are precisely the sort of weaknesses which investors hope a trade settlement can mitigate if not entirely cure and the price of international benchmark Brent crude still looks set to end the year with gains of about 25%, while US crude has gained about 35%. December’s decision from the Organization of Petroleum Exporting Countries and others, like Russia, to extend and deepen production cuts remains highly supportive.

Price have had a strong and accelerating run higher since the daily-chart lows of October. This has taken their progress within the dominant and well-respected uptrend channel to within striking distance of the broad band of resistance which guards the way back to this year’s April highs. 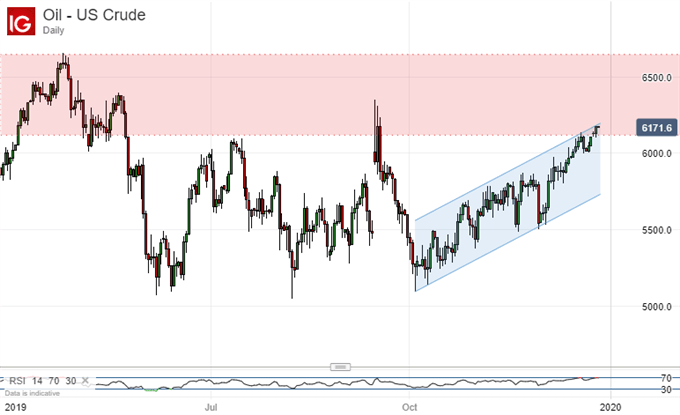 That said prices are now starting to look unsurprisingly heavy and, while the uptrend is certainly not threatened, it might be a mistake to push matters too much harder from here in the short term. Retracements are likely to find support close at and between December 19’s highs in the $61.29 area and the subsequent low made at $60.17. Even if those give way, and even a modest retracement could see that, support looks quite solid down to the $59.61 area, with the overall uptrend likely to endure.

Meanwhile gold prices retreated through Friday’s session. Risk appetite was a little more evident thanks to Wall Street’s late-year charge up to record highs which was reflected in Asian equity action.

Investors still see enough uncertainty around to justify holding the metal at these levels and that will probably remain the case at least until further US-China trade details come to light. 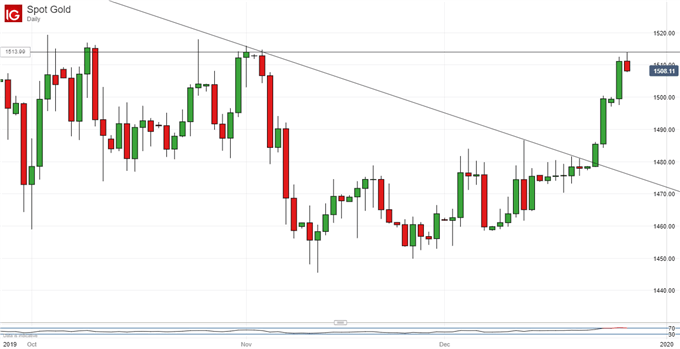 The current impressive rally looks to have run out of steam at the previous significant highs, printed in November. The usual caveats about the latest leg higher having come during thin, holiday markets do apply, but there clearly remains a significant underlying bid for gold, whether or not it justifies current levels.

In any case momentum indicators suggest that the market now looks very overbought and some consolidation is very likely in the near term. It will be instructive to see whether that process will see prices remain above their medium-term downtrend line. That was left far behind by December’s rise and is now some way below the market at $1476.75. Still, it wouldn’t be unreasonable to expect an approach to it if the market steps back into the New Year, with the bulls likely to view its successful defense as a significant victory.

November’s highs may effectively cap the upside next week.