Gold prices rose to their highest level for six weeks on Tuesday as US-China trade concerns returned to dog a market already pressured by weaker US economic numbers in the previous session.

Orders for US-made capital goods barely rose at all in November, with shipment levels falling. This in turn raises question markets over business investment as the world’s largest economy heads into the new year. News that Canada’s economy unexpectedly contracted in October didn’t help risk appetite either, although a US auto strike may be behind the slip.

Investors also awaited developments in the ‘phase one’ trade deal between China and the US. Although this agreement is of course welcome, it’s the more substantive follow-on deal that the world is really waiting for and, there, details remain scant. It’s also not yet clear to what extent other issues such as democracy in Hong Kong, treatment of China’s Uighur minority and territorial disputes in the South China Sea may impact talks. Until it is, gold probably won’t see a meaningful fundamental selloff. 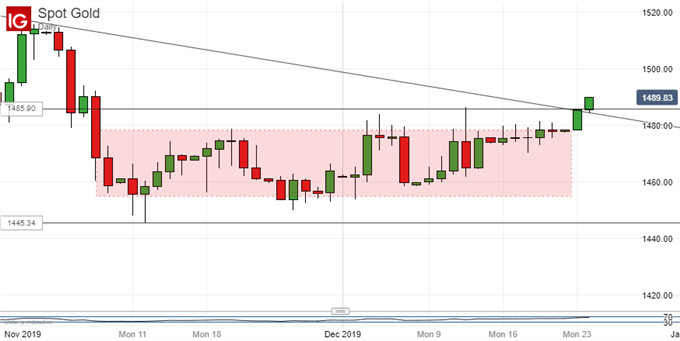 The last couple of days have seen a little late-year surge for gold breach some significant resistance points. Firstly the top of its near-term trading range give way, followed by the previously dominant downtrend from this year’s September highs. Finally, the 23.6% Fibonacci retracement of this year’s rise has fallen with the break of resistance at $1485.90. While all this looks quite bullish for the oldest haven, the usual caveats about thinner year-end markets must apply. Gold is most unlikely to weaken significantly in an environment of such global uncertainty but it would not be surprising to see the former range back in play soon.

Meanwhile crude oil prices inched upward, supported by comments from Russia’s energy minister Alexander Novak who said that cooperation with the Organization of Petroleum Exporting Countries to support the market would go on. A second weekly decline in US crude stockpiles was also reportedly forecast. 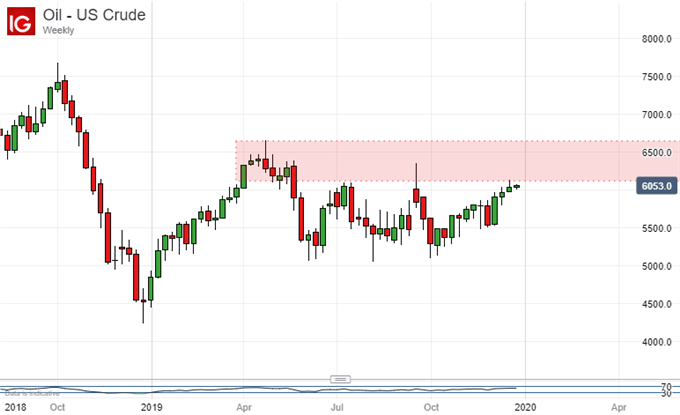 US crude prices remain close to September’s highs on their weekly chart, with a clear procession of gains evident since the market bottomed out on October 7. Still, the bulls have yet to push on into the resistance zone guarding the way back to April’s 2019 peaks.

They may well do so in due course unless global economic data cast doubt on prognoses of higher energy demand. But that upward foray may have to await the new year to play out reliably.