Crude oil prices held on again close to three-month highs on Friday and look set for a third straight weekly gain as investors still hope for progress on the US-China trade front.

Progress towards at least an initial, Phase One trade settlement has investors betting that 2020 could see higher-than-expected energy demand. Production cuts from traditional producers are also lifting prices, with this week’s news of inventory falls in the US has helped too.

Major banks such as Goldman Sachs and JP Morgan have raised their oil-price outlooks this week, adding to the bullish mood.

Moreover, China said on Thursday that six oil and chemical products from the US would be exempt from tariffs, with that interim overall deal still apparently on course for signing in the middle of next month.

The rest of the session may not offer the markets much in terms of scheduled economic data. They’ll get another look at third-quarter Gross Domestic Product growth out of the US, but no revisions are expected. Personal Consumption and Expenditure numbers are coming too. 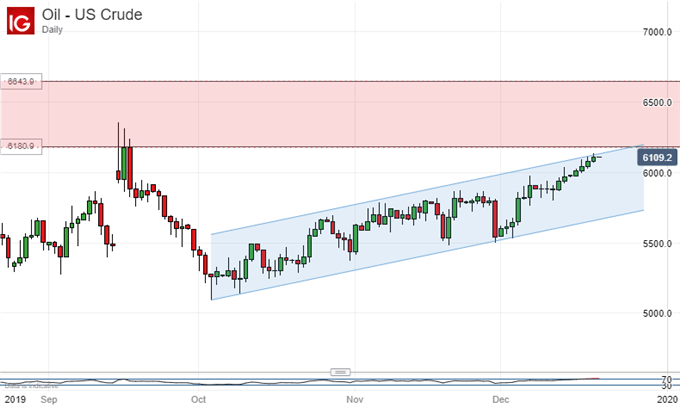 The daily chart shows a clear, strong and accelerating uptrend which has taken prices very close to a resistance zone which guards the way back up to April’s 2019 peaks. The market may yet get there but it looks slightly overbought at this point and, given the likelihood of thinner conditions into year end, a break higher in the near-term may not be one to trust until we move a little further into the new year. However, support looks quite firm above the psychological $60 area and, barring bad news on trade, this market seems to want to head up.

Gold prices edged lower although worries about a so-called hard Brexit have survived last week’s decisive election win for the ruling Conservative Party and seem to be maintaining an underlying bid for the oldest haven. 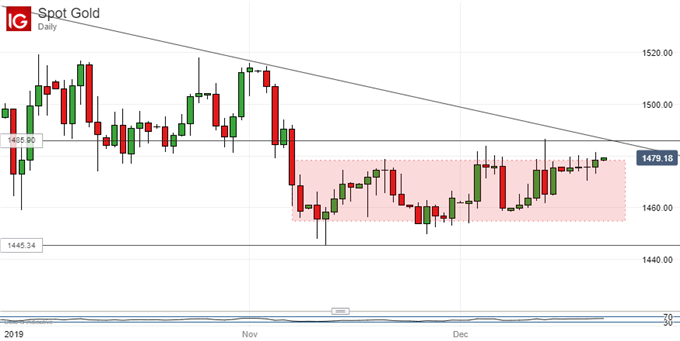 What looks like a modest uptrend on an intraday basis seems more like a range-trade when you look at it purely in terms of daily opening and closing levels now. The price is still quite nearly pinned between the broader range of first and second Fibonacci retracements of this year’s rise, but it seems quite unlikely that this range will be threatened as 2020 bows out.

The overall daily chart downtrend from September’s peak could soon face a challenge but, again, any near-term rise above it may not be worth trusting.