Gold prices were higher in Asia Thursday after the US House of Representatives voted to impeach President Donald Trump, accusing him of misuse of power and obstruction of Congress and setting up a trial in the Senate.

Trump will be only the third President to be impeached, joining Andrew Johnson and Bill Clinton, even though the Republican-controlled Senate is unlikely to remove him from office.

The US Dollar eased against a basket of currencies on this news, a sight which also tends to support gold. The market’s more usual worries- Brexit and US-China trade, were put to one side but they will be back soon enough.

The remainder of Thursday’s session is short of likely scheduled risk events, although the Bank of England’s monetary policy decision and US jobless claims data will of course attract attention.

UK interest rates are expected to remain on hold but any further commentary from the central bank related to Brexit in the wake of last week’s general election will be eagerly awaited.

Prices remain quite neatly caught between the first and second Fibonacci retracement levels of this year’s overall rise. 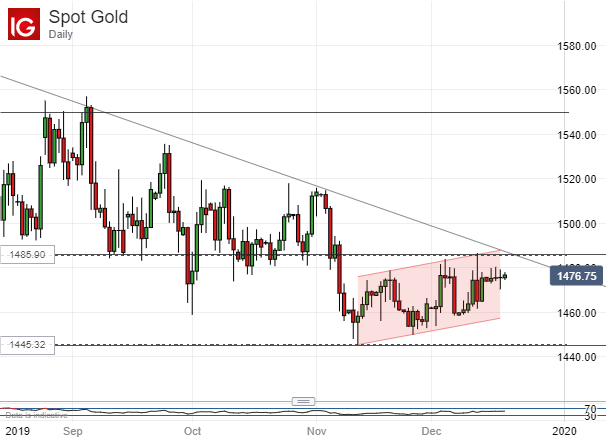 The modest but clear uptrend in place since early November remains in place and looks quite secure but the more ancient and entrenched downtrend from this year’s September highs looks quite safe too.

As markets thin for the holiday season it seems unlikely that this downtrend will break or, if it does, that the break will be one to wholly trust. There are signs of recovery across many developed economies, most recently a strong employment report from Australia Thursday. US-China trade headlines may well preserve an underlying bid for gold but the market is under longer-term pressure as the chart shows.

Crude oil prices remained close to three-month peaks after yet more US data showed a drop in inventories at a time when output cuts are limiting supply. According to the Energy Information Administration’s weekly numbers, stockpiles fell by 1.1 million barrels of oil in the week to December 13, although refined product supply rose.

Prices remain in a steep and well respected uptrend from late September on their weekly chart and seem on the verge of breaking up their previous significant high of $60.93 set on July 8. 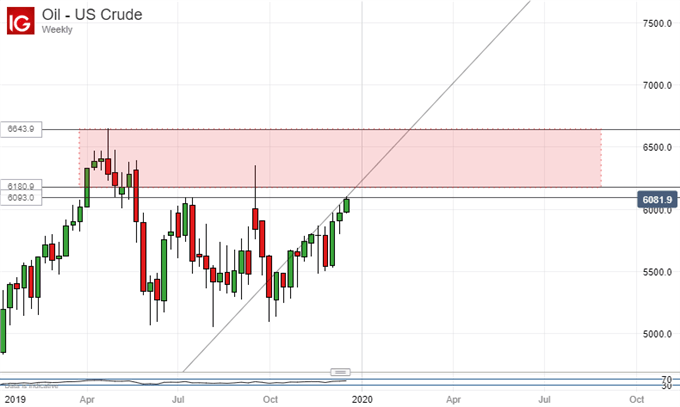 If the bulls can get above that point, they’ll be able to contemplate the resistance zone which guards the way back to April’s highs but an assault on those may have to wait until new year trade gets started.