Overall investors are still deriving some reassurance from last week’s news that a phase-one trade deal between China and the US is coming, even if details are scarce. The election of a strong, pro-Brexit majority in the United Kingdom has also reduced uncertainty over that country’s future path.

Still, with both stories liable to throw up market-moving headlines the underlying bid for gold remains. The metal is also on course for a strong 2019. If it holds around current levels the 15% gain seen since January will be the strongest for nine years.

The minutes of the last monetary policy meeting from the Reserve Bank of Australia kept the prospect of lower interest rates very much on the table for next year. This may have added to the conducive environment for gold and the market will be on watch for more of the same from the Bank of England and the European Central Bank. The former will set policy on Thursday while the new President of the later, Christine Lagarde, speaks on Wednesday.

Spot gold prices remain well within the uptrend channel in place since mid-November. 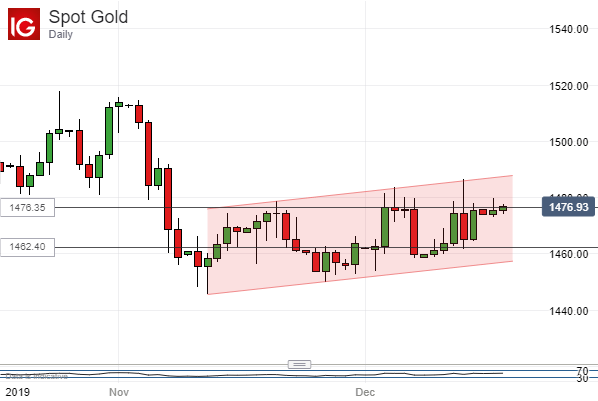 The validity of that channel endures, with a clear upside test rejected as recently as December 12. However, within it, prices seem to have settled into a broad daily-closing range between $1462.40 and $1476.35. It might make sense to watch this band for directional cues within the channel.

Meanwhile, crude oil prices continue to benefit from the prognosis that the re-forging of trade links between China and the US will mean higher energy demand all round.

The market’s attention may be caught by more immediate concerns this week, however, with the release of US inventory data due on Wednesday from the Department of Energy. 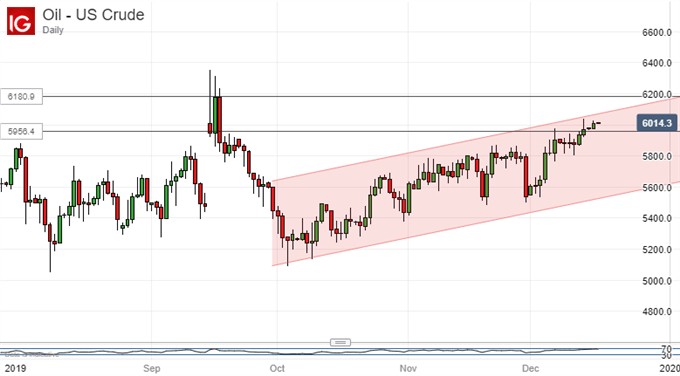 Prices for the US WTI crude oil benchmark have slipped back very little from last week’s three-month peaks and the daily chart looks very constructive still. Its most obvious uptrend remains very much in place, too, with bulls perhaps girding themselves for another try at the top of mid-September. Their ability to hold above support at $59.56 may be key to this attempt. It represents the closing low of September 15.