The Organization of Petroleum Exporting Countries agreed to increase output reductions early in the new year but stopped short of promising further steps beyond the current March 2020 deadline. OPEC and its allies, which include Russia, form the OPEC+ group. It agreed to more cuts in the face of ongoing trade tensions between China and the US and the generally weaker global growth trend now in place.

The agreement must be formally ratified on Friday. It aims to cut another 500,000 barrels per day (BPD) from global supply, above the 1.2 million BPD currently in play.

While market attention will remain squarely on OPEC’s Vienna headquarters Friday, official US employment numbers are also coming up. They’re still arguably the most closely-watched single piece of data in the monthly economic round.

Gold prices were subdued in Asian trading while investors waited for these. Risk appetite held up reasonably well, with major regional equity indexes all in the green.

The markets are looking for a reasonably perky rise of 186,000 nonfarm jobs for last month, with the unemployment rate expected to remain steady at 3.6%.

Gold prices will face a few notable risk events in the coming week, with the year’s final monetary policy decision due from the Federal Reserve and a particularly binary general election for the markets coming up in the UK.

The market remains under pressure and may well find little respite in the prognosis that most major central banks may pause their monetary easing cycles now until well into 2020.

Prices nudged above their daily chart range top on an intraday basis Thursday but bulls have yet to nail down these gains with a close above it. 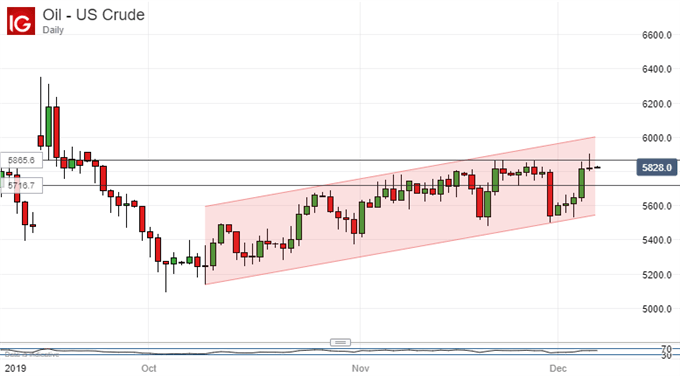 Given that the substance of OPEC’s plans is now known, it may be a big ask for prices to top that point again before the end of trade Friday. However, crude remains very much driven by its dominant near-term uptrend channel having powered away from its base quite impressively this week.

For as long as support holds at the range base of $57.16/barrel the market’s upward bas seems likely to be maintained. 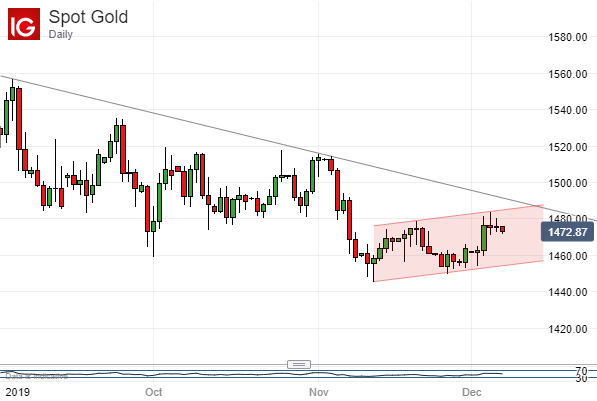 Spot prices have managed to hug a modest uptrend channel of their own since mid-November. However, it seems to be showing clear signs of topping out once more, without the main, falling downtrend line from September’s 2019 peaks ever being threatened. Indeed, it hasn’t been since November 1.

Near-term support is likely at the previous significant low of $1453, but a revisit of that level would probably see aa test of the channel base quite quickly.