Risk appetite was also blunted by China’s angry response to President Donald Trump signing legislation in support of democracy and human rights in Hong Kong, putting the Administration firmly on the side of anti-Beijing protesters.

China accused the US of meddling and ‘sinister’ purpose. Of more immediate concern to markets will be the effect if any on the interim trade accord whose supposed proximity has bolstered risk appetite this week.

The US Thanksgiving break will probably see markets calmer, if more thinly traded and perhaps volatile. However, all energy markets are now looking towards December’s meeting of the Organization of Petroleum Exporting Countries at which production cuts which also include Russia are likely to be extended.

Gold prices were supported as risk appetite dried up, with anti-cyclical, haven currencies like the Japanese Yen and Swiss Franc also gaining. Palladium made a record high before paring gains. The precious metal is a key ingredient in catalytic converters and its price has risen more than 40% this year thanks to scarce supply.

This market faces one or two major European risk events Thursday. Swiss growth data are expected to show continuing weakness and may support the bid into gold if so. Germany’s consumer price inflation however is expected to weaken on the month in November. Weaker pricing power tends to hit gold which often features in portfolios as an inflation hedge.

US crude prices remain rather fascinatingly trapped within a range which corresponds closely to the trading action seen on September 24 when the market fell sharply. 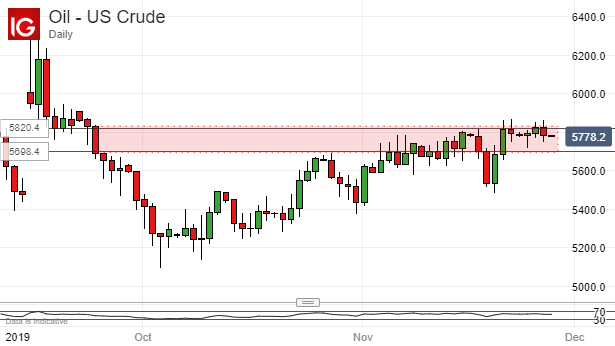 While still in an obvious strong uptrend from October’s lows, the market has failed to make a convincing daily close above the top of that range. Unless risk appetite decreases sharply it will probably manage this feat in the coming days, but the uncommitted may be wise to treat the next few days’ holiday affected moves with suspicion.

Prices continue to creep lower within a broad daily chart range defined by the first and second Fibonacci retracements of the rise up from the lows of May to the peaks of September. 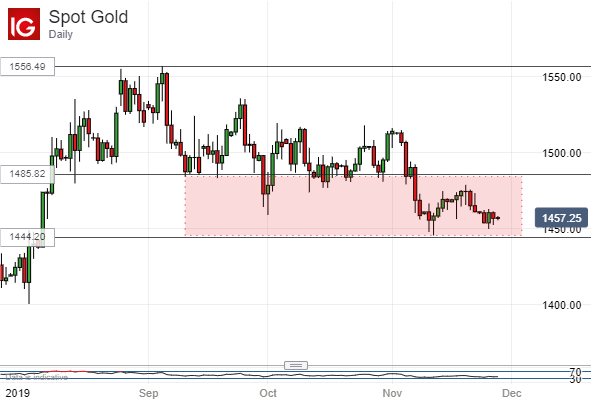 Prices have found support above the lower band around the lows of November 10 in the $1455 region. While the market is unsure as to what degree US political action will stymie a trade accord it seems unlikely that gold’s haven bid will abandon it so far as to admit a challenge to the range base. That said the bulls will probably need to regain the previous significant peak if they’re to mount a serious response to recent weakness.