US President Donald Trump said the day before that Washington and Beijing were close to agreeing the first phase of a trade deal after top officials agreed to keep working on remaining issues. That was enough to give risk appetite across the Asia-Pacific region a boost, meaning assets like stocks and commodity currencies found favor instead of havens like gold and the Japanese Yen.

Local economic news only highlighted how crucial an agreement might be, with October's Chinese industrial profits falling at their fastest pace since 2011. The next major predictable risk event for markets will come soon enough with US durable goods order data due in the US session, along with Personal Consumption Expenditures numbers and jobless-claim totals. Gross Domestic Product numbers are due too, but they’re expected to be unrevised from initial estimates.

Crude Prices Grapple With News of US Stock Build.

Crude oil prices were for once unable to capitalize on trade-deal optimism. Tuesday’s news of a stronger-than-expected weekly build in US inventories kept prices under pressure, as investors looked ahead to next month’s meeting of major exporters in Vienna. This is expected to see current production cuts extended well into 2020.

Spot prices are clearly still well within their medium-term downtrend, meandering lower from their peaks of September. 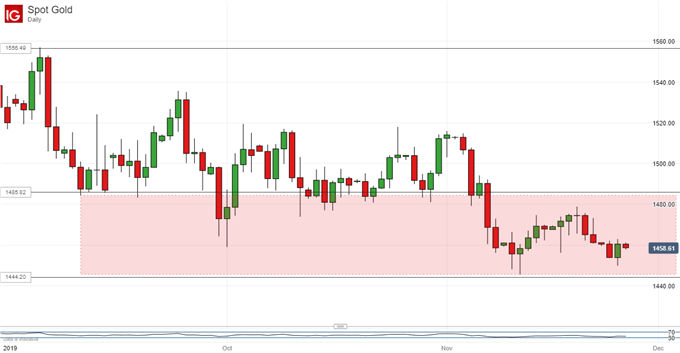 However, they are now quite nearly boxed-in between the first and second Fibonacci retracements of their rise up from the lows of May to those September peaks. The underlying haven bid for gold is likely to remain resilient at least until the longed-for interim trade deal is a reality, with other market worries like Brexit and unrest in Hong Kong still simmering away.

Still, a break through the lower bound of the current wide range would mark a clear deterioration in sentiment, if it endures.

Crude oil prices by contrast remain in the ascendant and look ready to challenge again the top of the uptrend channel in place since early October. 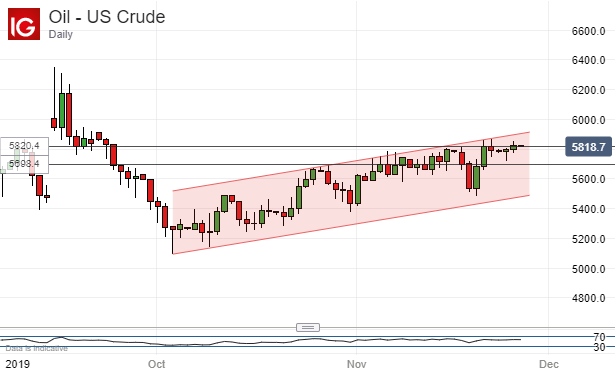 Prices are close to clawing back the steep falls of September 24, a day whose broad daily range has provided an interesting trading band. To do that the bulls will have to sustainably top $58.20/barrel, but that looks eminently possible.