Crude oil prices continue to advance in an upward-sloping channel on the charts but an acceleration of the trend higher seems unlikely until the US and China finally resolve their ongoing trade dispute.

Broader market sentiment was boosted Tuesday by US President Donald Trump, who told reporters at the White House that the US and China are “in the final throes of a very important deal,” adding the talks are “going very well”. Any such deal would help lift oil prices, and their underlying strength was emphasized Tuesday by the lack of a negative response to an American Petroleum Institute report of a crude oil inventory increase of 3.639 million barrels in the week to November 21, compared to analysts’ expectations of a 418,000barrels fall. 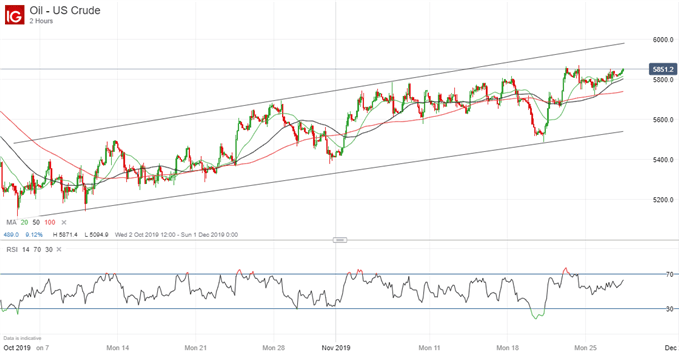 Near term, traders will be watching to see whether official US Energy Information Administration inventory data, due Wednesday, show the 418,000 barrels drop predicted by analysts. However, looking further ahead, it is still possible that the trade talks could be scuppered by a row between the two countries over Hong Kong. Trump said Tuesday that while the trade negotiations are going very well “at the same time we want to see it go well in Hong Kong” – a remark unlikely to be welcomed by Beijing.

In the meantime, IG client positioning data show that retail traders are currently net-short US crude oil. At DailyFX we typically take a contrarian view to crowd sentiment and the fact traders are net-short suggests US crude prices may continue to rise. Traders are further net-short than yesterday and last week, and the combination of current sentiment and recent changes gives us a stronger crude-bullish contrarian trading bias. 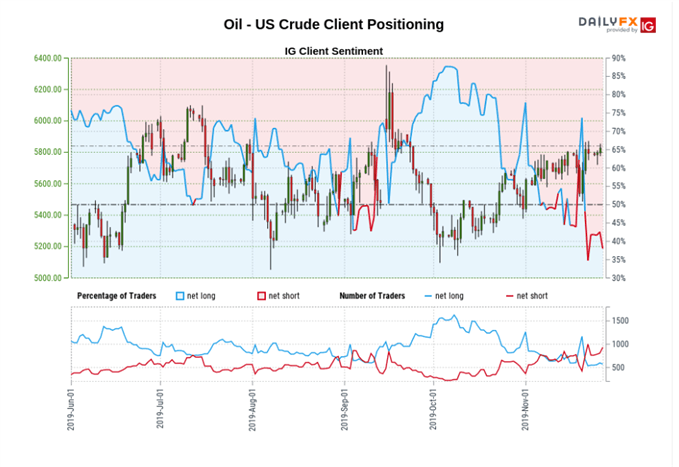