Crude oil prices were steady close to two-month highs Tuesday with US-China trade dealings as ever driving the market, as indeed they do all others.

There was some risk-appetite sharpening good news around as top trade negotiators from both sides spoke over the phone on Tuesday morning, according to China’s Commerce Ministry. That country’s Global Times reported on Monday that Washington and Beijing were close to agreeing a ‘phase one’ trade deal.

Markets have taken signs that talks continue as good news, which of course in the most basic sense it is. However even the Global Times had to admit that sticking points remain, with tariff rollbacks apparently a major one.

More oil-specifically, the market is still getting support from the prognosis that production cuts from the Organization of Petroleum Exporting Countries and Russia will be extended when the parties meet next month in Vienna.

This week’s stockpile data are eagerly awaited with Reuters predicting the first decline for five weeks in crude reserves when the American Petroleum Institute reports later Tuesday. The Energy Information Administration’s figures are due Wednesday.

Those numbers aside the market will look to the day’s heavyweight economic data which will come in the form of US trade and consumer confidence figures.

Meanwhile spot gold was predictably bearish as hopes for that interim trade deal prodded investors into riskier assets. Prices slipped to two week lows earlier in the session only to pare losses a little as the Asian day went on.

US Federal Reserve Chair Jerome Powell said on Monday US time that his officials have a favorable outlook on the domestic economy. The Fed has determined to leave rates on hold unless the economic data appear to force its hand. Gold tends to do better when lower rates, and lower bond yields, reduce the costs of holding it.

Prices remain close to two-month peaks and very close to the top of their daily-chart uptrend channel. 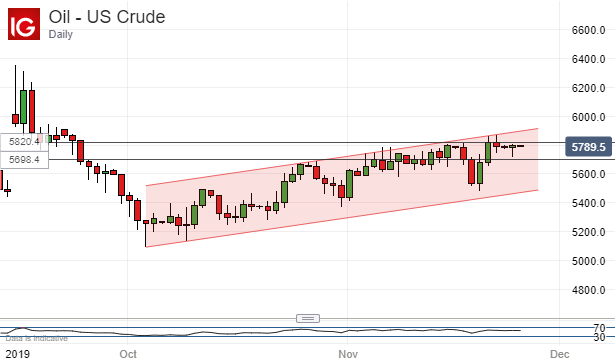 The current trading range is effectively bordered by the trading action of September 24, a day whose opening level provides the range top, at least on an intraday basis. Prices look likely to try that top again and may go on to test the channel top as well, but as usual action will probably be dictate by trade headlines.

Gold’s daily chart looks in some ways like the opposite of oil’s. Prices are comfortably within the downtrend channel which has effectively bounded the market since the peaks of early September.

Gold is now tentatively inching below the last significant lows, those of November 11 in the $1,450 region. They haven’t conclusively given way but a lasting break looks simply to be a matter of time. Once it happens, the trading range in play between June and August will be back in focus. It centers around the $1,437 area with the psychologically important $1,400 mark getting closer.