Gold prices slipped on Tuesday with risk appetite broadly higher. As ever US-China trade prospects are in control and, while a report from Reuters suggested that a substantive, phase two deal, may yet be some way off a Tweet from China’s global times said that an interim, phase one accord was ‘very close.’

Of course, markets are used to making the best of these straws in the wind, and it’s not been unknown for one side to sound less cheerful than the other. However, coupled with a resounding landslide for pro-democracy parties in Hong Kong’s district council elections, they were enough to see growth-correlated assets like equity make substantial gains at the expense of more modest falls for havens like gold.

Investors clearly hope that the scale of the electoral victory will force Beijing to take a more conciliatory line, possibly removing Hong Kong as a barrier to trade-talk progress. This may prove optimistic, however.

All markets will now look ahead with interest and some trepidation to Germany’s Ifo business sentiment index. Europe’s economic powerhouse has been slowing for some time, putting data like this very much to the fore.

Crude oil prices were as ever boosted by hopes for trade rapprochement, but even this story is likely to take a back seat as November bows out and the Organization of Petroleum Exporting Countries summit nears next month. Energy markets suspect that current production cuts will be extended, at least until June. They’re currently due to expire in March.

Prices seem clearly to have topped out at August’s peaks but the bears are having great trouble in conclusively breaking below the current trading range.

A daily close below it this week could be significant and put downside focus on the psychologically important $1400/ounce level. Bulls will probably struggle unless they can make good the steep falls seen on November 4. That doesn’t look very likely in the near-term but, given the current uncertain and binary nature of many matters which face investors, a meaningful loss of gold’s haven bid still looks unlikely. 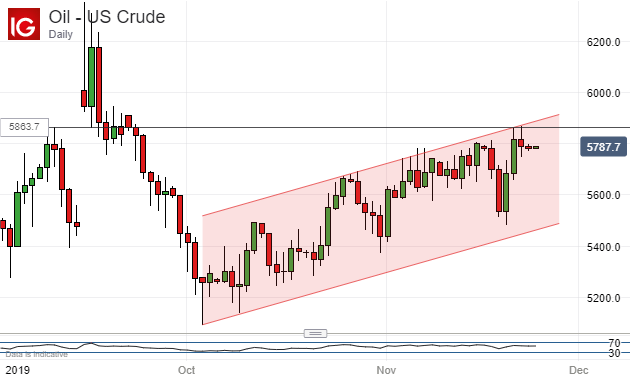 US crude prices are well within their long-dominant uptrend and, indeed have in the past week tested its upside. They’re at highs not seen since late September and don’t look very likely to retreat. Whether bulls will be able to convincingly recapture those levels is still unclear and, even if they can, the market may require some consolidation first.