Gold prices edged up a little in Thursday’s Asian session as risk appetite was hit by worries that an interim US-China trade accord may not be signed this year after all.

Completion of a ‘phase one’ deal could slide into 2020 Reuters reported trade experts and people close to the White House as saying.

The report came as diplomatic tensions were heightened by the passage of bills through the US Congress in support of human rights in Hong Kong. Stock markets across the region wilted with less risky assets such as gold and the Japanese Yen the beneficiaries.

However, equity markets did pare their losses, which saw gold price gains reduced in turn.

Gold has already seen substantial rises this year as trade tensions and the prospect of lower global interest rates have added to its allure.

The markets’ immediate focus is likely to be the global outlook from the Organization for Economic Cooperation and Development due for release later in the global day. The last edition stressed the urgent need of returning to a rules based world trading order. It’s hard to see developments since lightening the OECD’s tone or, indeed resulting in a report likely to anything but hit risk appetite again.

The European Central Bank’s version of the policy meeting minutes released by similar institutions is also coming up. Still, as the October 24 meeting in question was former President Mario Draghi’s last in the chair, ECB watchers may prefer to wait for his replacement Christine Lagarde’s first, due on December 12.

Crude oil prices slipped back as they generally do when trade-related worries are driving markets. They had risen on Wednesday’s US session thanks to news of a surprise inventory rebuild from the Energy Information Administration.

Gold prices are at a potentially interesting point on their weekly chart having probed below their range base on an intra-week basis once again. It would be surprising in the current fundamental risk environment to see them fall durably from here but this week’s close could be instructive.

Wednesday’s gains on that stronger-than-expected inventory report have propelled US prices back into the former daily chart range abandoned on Tuesday. 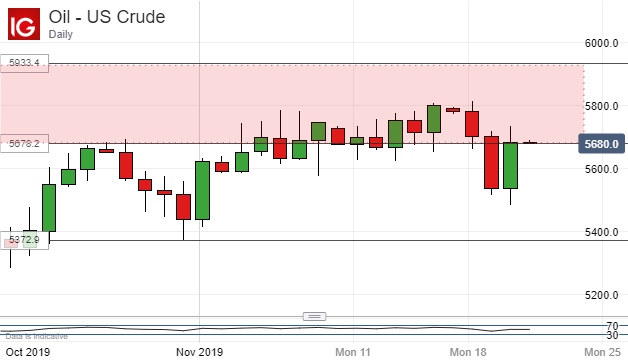 However, as can be clearly seen, it didn’t do so very convincingly and the potential for prices to top out and fade again will remain for unless the bulls can manage a daily, and then weekly, close above the line.