Crude oil prices remain in thrall to the US-China trade story, which has seen them continue under pressure on Wednesday.

The US Congress voted unanimously for legislation in support of human rights in Hong Kong during Asian hours, with Beijing responding with indignance. Growth worries were already stoked by Donald Trump. The US President ramped up the trade rhetoric by threatening China with perhaps significantly higher tariff barriers if negotiations don’t progress.

This turbulence led the usual backing-off in risk appetite, with stock markets lower across the region. Crude oil had already been hit by an unexpected rise in US inventories in the week of November 15. The American Petroleum Institute said stocks soared by 6 million barrels, fully 4.5 million more than the markets had been looking for.

This news came along with reports that major producer Russia was unlikely to back deeper output cuts when the Organization of Petroleum Exporting Countries meets in early December.

Market focus now will be on stockpile data from the Department of Energy which is due later on Wednesday. Also coming up early Thursday morning Asia Pacific time will be the minutes of the last monetary policy meeting of the US Federal Reserve.

These are expected to strongly imply that borrowing costs will not be cut soon absent a collapse in the economic data. If so this may dent risk appetite further even if many investors may feel that the minutes have now been overtaken by the gloomy turn trade talks have taken since.

Gold prices understandably edged up as waning risk appetite underpinned demand for haven assets. The Fed minutes may present bulls with a problem if they suggest the bar to lower US borrowing costs remains quite high. Lower rates tend to support non-yielding assets like gold.

Protests in Hong Kong also fed into gold strength. The last of a group of anti-government protesters are reportedly contained inside a university building, weighing their options as the police appear prepared to wait them out.

Prices show a clear risk of topping out as they’ve traded this week quite briskly out of a key resistance zone which was only ever tentatively probed. 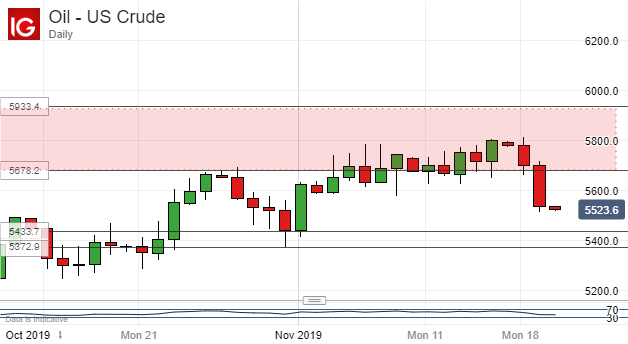 If the bulls don’t step back in, and there’s little sign of it, focus will return to near-term support at October 31’s lows of $54.34/barrel, This may not survive a determined bearish foray, however. Wednesday’s stock data could see it tested if it matches the surging numbers already released.

Gold has pushed tentatively back into a trading range which had previously held between September 25 and November 7, only to be abandoned as market optimism about a trade agreement rose.

Now that optimism has clearly waned again, but still gold bulls have yet to nail down their gains within that range. Their tenure there will be vulnerable to any risk snap-back unless they can move much closer to the psychologically important $1,500/ounce level.