Gold prices edged up to 1.5-week highs on Tuesday with broader risk appetite dented at least to some extent by doubts over any US-China trade accord, and of course by continued unrest in Hong Kong.

CNBC reported on Monday citing a government source, that Beijing was pessimistic about a deal and concerned that the US will not roll some tariffs back, when China’s understanding had been that it would. The story has moved on no further in Asia’s Tuesday but the doubts it engendered have lingered.

Secretary of State Mike Pompeo said that the US remained gravely worried about deepening violence in Hong Kong and urged the city’s administration to tackle public concerns. It’s possible that a hard line from Beijing against the protesters would make any form of trade deal much less likely.

Overall risk appetite was not helped by the release of minutes from the Reserve Bank of Australia’s last monetary policy meeting. These were decidedly dovish and surprised markets with the revelation that, although interest rates were in the event kept on hold, policy markers felt that the case could have be made for a cut. Futures markets thought one might have been coming in 2020 anyway, but are now on heightened watch for an earlier move.

The week is short of scheduled risk events which will, inevitably, leave trade headlines to drive. However early Thursday Asian time will see the release of the Federal Reserve’s last monetary policy minutes, probably the week’s main event.

Crude oil prices unsurprisingly slipped back as risk appetite waned. A poll from Reuters this week had already revealed expectations that US stockpiles would rise for a fourth straight week. The American Petroleum Institute will release its weekly snapshot later on Tuesday while the Energy Information Administration’s version will be out on Wednesday.

Spot prices remain above the modest uptrend line in place since the recent lows of November 12.

There’ve been some fairly modest daily ranges since then, however, with Tuesday so far looking likely to add to the list. This speaks to a degree of uncertainty in the market even if, given current fundamental conditions, the underlying bid for haven assets must be extremely unlikely to evaporate.

Bulls probably need to get sustainably above resistance at $1,473.48 to make their gains stick. They’ve so far been unable to do so on a daily closing basis and, if they can’t this week, the price may show signs of topping out more durably.

Prices have managed to trade back into an important resistance area between $56.78/barrel and $59.33. A near-term attempt at its upper reaches looks quite out of the question for the moment however. 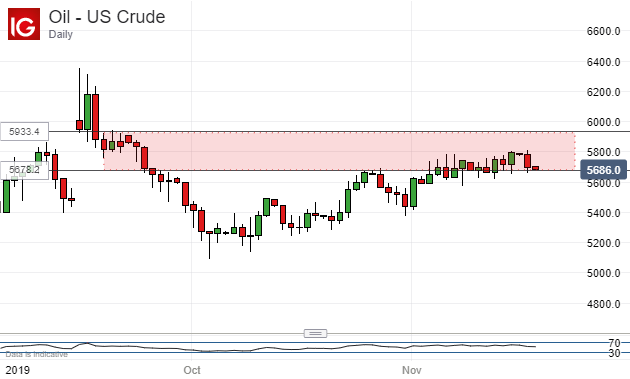 Of more immediate concern is the market’s ability to stay above the lower band and with that in mind Tuesday’s remaining trade could be interesting.