Crude oil prices made gains in Asia on Thursday, despite clear evidence that Chinese demand could be faltering, thanks to comments from the Organization of Petroleum Exporting Countries.

Its Secretary General Mohammad Barkindo said on Wednesday that there are likely to be downward revisions to supply forecasts going into 2020, especially from the US shale fields. This news came close to industry data which showed a surprise fall in US crude inventories, putting renewed focus on this week’s information on the same subject from the Department of Energy.

These two factors were enough to see both US crude and international benchmark Brent make gains. However regional economic data probably provided some impetus the other way. Chinese industrial production rose much more weakly than expected in October. This news hit commodity currencies like the Australian and New Zealand Dollar. They’d already been sent lower earlier when Australian employment figures came in much more weakly than had been expected.

The US-China trade story continues to simmer and depress risk appetite. The US is reportedly trying to secure concessions on intellectual property protection while China is said to be reluctant to commit to buying a specific amount of agricultural products.

Oil markets will like all others look to continued Congressional testimony from Federal Reserve Chair Jerome Powell on Thursday. He is due before the House Budget Committee. Speaking before the Joint Economic Committee on Wednesday Powell was modestly upbeat about economic prospects but he did warn that the Fed lacks the ammunition it has had in the past to fight any downturn.

Gold prices inched up through the Asian session as those Chinese data kept haven demand simmering. However, they didn’t rise far and had been pressured earlier when Powell cited US growth, subdued inflation and strong employment levels. None of these would seem to argue for the lower interest rates which can often support gold prices.

This market too will await whatever the Fed Chair has to add later Thursday.

US crude prices continue perhaps against the odds to hug the upper half of the uptrend channel dominant since the start of October. 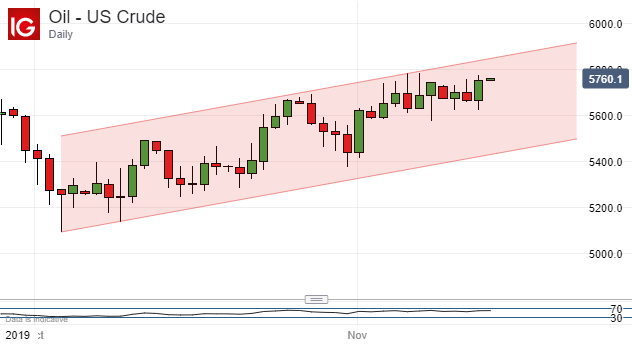 Wednesday’s gains have seen the chart make a new higher high on a daily close basis, above the previous top of $57.38/barrel made on November 8. However, the market still looks very well supplied fundamentally and it may be too much to ask of the bulls that they mount another near-term challenge to the channel top, although it’s clearly not out of the question.

Market response to the next inventory data from the Department of Energy, to be released early on Friday Asian time, could be most interesting with this in mind.

Prices have staged a so-far modest daily-chart bounce at the lows of October 5, but it’s still early to suggest that the bears are going to be held for long at these levels.

If the market holds above them into the end of the week it might be modestly bullish near-term sign for gold but a bullish fightback to the previous significant peaks of early November looks like a big ask.