Gold Prices Up on US-China Trade Jitters, US CPI Unlikely to Hurt

Gold prices were supported in Asia on Wednesday by the now-usual combination of US-China trade uncertainty and political unrest in Hong Kong. The market was also looking ahead to US inflation data, but this would probably have to accelerate well ahead of expectations to have the market revisit its view that interest rates won’t rise anytime soon.

US President Donald Trump’s speech to the Economic Club of New York in the previous session was frustratingly light on trade detail. He said that Beijing wanted a deal but referred to China as historic trade ‘cheaters.’ He also suggested that in interim deal might be close but offered no specifics.

Closer to home for the region, Hong Kong’s police said that protests were pushing the city to the edge of breakdown, with no sign of resolution in sight. The unrest preserving a bid for haven assets such as gold.

The main economic event of the day to come will be official US Consumer Price Index data. The annualized rate is expected to remain steady at 1.7%, not a level calculated to move the Federal Reserve away from its current policy stance.

The Reserve Bank of New Zealand shocked markets by leaving its benchmark interest rates on hold when investors had expected another cut. This may have had some pass-through to the gold market for which a global environment of lower borrowing costs offers some support. However, New Zealand’s rates remain at record lows, as they do elsewhere, and may yet go lower as the central bank judged that economic risks were skewed to the downside.

Crude oil prices struggled as they often do when a US-China trade deal is perceived to be in doubt, but that was far from the only market driver. A forecast from the International Energy Agency looked for slower demand growth from 2025 as fuel efficiency improves and the roads are increasingly given over to electric vehicles. Although the forecast had quite a long time horizon it came as investors were already fretting an oil market which looks clearly oversupplied relative to slowing global demand.

Prices show clear signs of forming a top on their weekly chart with the gradual downtrend in place since the week of September 2 still very much in charge.

This week prices are threatening to break below the opening levels of the week of August 5 at $1443.62/ounce. Should that point give way it might be quite bearish for gold and, perhaps open the way for falls below the psychologically important $1400 support area.

Despite all those fundamental oversupply worries, US oil prices’ daily chart still shows that the shallow uptrend channel from early October continues to hold sway. 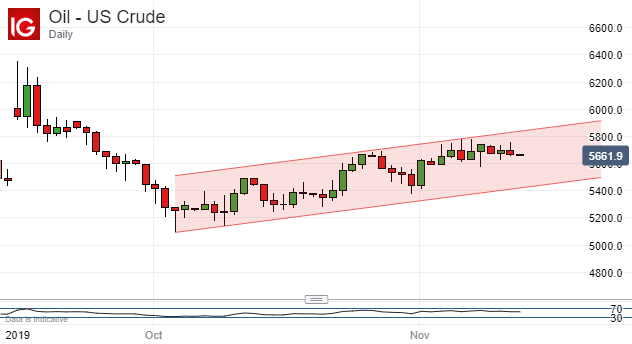 However, the channel top saw another attempt to break it fail at last week’s intraday highs and prices may be topping out. Support at October 31’s closing low of $54.45 could be important now as its ability to hold could decide whether or not the channel base will face another near-term test.