Gold prices are unlikely to move much Thursday on the Bank of England’s forthcoming interest rate decision which is widely expected to see UK borrowing costs unchanged.

The BoE’s call is probably the day’s main scheduled economic event, but there’s so little chance of a move that trading opportunity around it will be very limited. The central bank usually tries to keep as low a profile as possible after the announcement of a general election, but it’s far from clear that it would be contemplating a move even were campaigning not under way. Indeed it seems Brexit has all-but tied policymakers’ hands near term.

Chinese trade numbers due on Friday may well have more to offer commodity markets given the obvious focus on that subject. Indeed gold prices were steady on Thursday thanks to reports earlier that meeting between Chinese and US leaders to sign an interim trade deal could be delayed in the face of discussions over terms and venue.

Gold prices remain apparently bound to a comparatively narrow range, well below October’s highs but disinclined to challenge the same month’s lows. Risk appetite probably remains much to fickle and headline-driven to see major falls. Low interest rates across developed economies reduce the opportunity cost of holding gold and, with growth forecasts under pressure (the International Monetary Fund cuts its Eurozone calls this week), they’re likely to stay put for a long time yet.

The same caution evident in the gold market could be seen in crude oil Thursday, however news of yet another US inventory build weighed on prices. The Energy Information Administration (EIA) said that crude stockpiles were up by 7.9 million barrels, smashing market expectations of a 1.5 million barrel build. Wednesday’s news that an auction of Brazilian offshore drilling rights had seriously underperformed expectations continued to drag on the market.

Range trade continues to dominate spot gold’s daily chart. The narrow band in place on a daily closing basis since the start of October continues to confine trade.

After a couple of sharp falls this week prices seem to be forming a base a little way above the range bottom, a challenge to the top having fallen short last week.

There seems little reason to suppose that momentum exists for a range break but another test of the base looks possible before this week bows out.

Spot prices remain in the shallow uptrend in place since early October and have this week managed to make a higher high above the previous significant peaks of October 25. 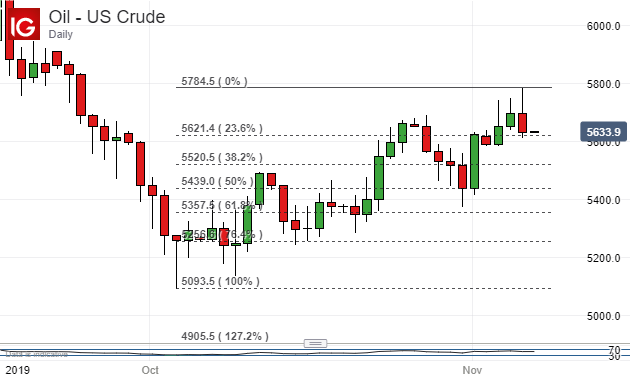 However, that upward move has seemed to lack a little conviction since, despite no obvious sign of overbuying in the momentum indicators. The price is already fading back to the first, 23.6% Fibonacci retracement of its ruse up from last month’s lows. Should that give way focus may revert quickly to the 50% retracement level. That comes in at $54.39 and is where the market bounced on October 31.